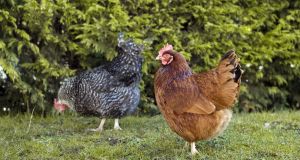 The High Court has granted a man leave to challenge planning permission for a chicken farm in Co Mayo.

The High Court has granted a man leave to challenge planning permission for a chicken farm in Co Mayo.

Michael O’Connor, of Brownhall, Balla, Castlebar, brought the case over An Bord Pleanála’s permission for a new poultry house and ancillary facilities at Brownhall Demense, some 80 metres from his home.

In an affidavit, he said Noel and Ann Mulhern, principals of the wholesale egg producers West-a-Wake Eggs, made the application for permission on land currently farmed by the mother and brother of Ms Mulhern.

The chicken farm will house 12,000 laying hens which will also have access to an open range.

Mayo Co Council refused permission and a planning inspector also recommended refusal. The board, in a decision that was not unanimous, decided to overrule the inspector and approve the proposal, Mr O’Connor said.

He had objected on grounds including noise and odour nuisance, groundwater pollution and risk of disease to his lands from intensive poultry farming.

He also says there is a risk to the River Moy Special Area of Conservation because the land drains into the Curryaphreaghaun Lough which feeds the Manulla River, a major tributary of the Moy.

He also said that the Ballinafad Special Area of Conservation, which is about 1.8km from the proposed development, has protecting a favourable habitat for the lesser horshoe bat, a protected species, as part of its conservation objective.

The council had refused permission in May 2018 due to noise impact on local residents and the risk to the River Moy SAC, he said.

The Mulherns appealed. A planning board inspector recommended refusal for reasons including failings and omissions in a noise report, dealing with noise from hens and operations such as manure removal and ventilation fans, he said.

The inspector had said the significant potential for noise disturbance would have an unacceptable impact.

Mr O’Connor said he was “at a loss to understand” how the board made a decision so different from the report of the inspector. The board did not request the Mulherns to “close significant gaps” raised by the inspector in relation to noise impact and mitigation measure for the River Moy SAC.

He was surprised the board gave such “sparse reasoning” for overturning the inspector’s report on the potential impacts on the European SAC site, he said.

The board said the chicken farm would not seriously injure the amenities of nearby properties by reason of noise and general disturbance or depreciate the value of those properties.

Mr O’Connor said it was not possible for him to understand from the board’s given reason “how it could have satisfied itself in relation to impacts from 12,000 hens in open air” in the absence of information the inspector said was missing from the Mulhern application.

On Monday, Mr Justice Charles Meenan gave permission to Mr O’Connor’s lawyers to apply for judicial review quashing the board’s decision following an ex parte application - where only one side is represented. The Mulherns are notice parties.

The judge also granted a stay on the decision pending further order.