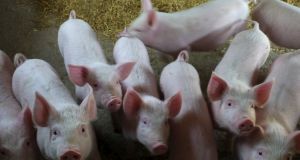 CapVest is buying Karro, which employs about 3,100 people and has an annual turnover of more than £500 million, from private equity firm Endless. Photograph: Reuters

It is understood that CapVest, which controls the Mater Private Hospital and Valeo Foods, a company behind brands from Batchelors to Jacob’s and Odlums, is understood to be set to pay about £180 million (€209 million) for Karro, which is based in Yorkshire and employs over 800 workers at a facility in Cookstown, Co Tyrone. It also owns butchery business McGees, based in Castleblayney, Co Monaghan.

CapVest, which was set up in 1999, set up Valeo Foods in 2010 through the merger of Batchelors with Origin Enterprise’s consumer foods unit, which owned brands such as Shamrock and Roma, before going on a year later to buy Jacob Fruitfield Food Group. Origin sold its remaining 32 per cent stake in Valeo to CapVest almost two years ago in an €87 million deal.

CapVest is buying Karro, which employs about 3,100 people and has an annual turnover of more than £500 million, from private equity firm Endless. Endless acquired the then loss-making operation four years ago and turned it around. The deal will see Karro’s management team, including executive chair Di Walker, remain in the business.

The deal is subject to approval from the Competition and Consumer Protection Commission in Ireland.

Karro swung into a pre-tax profit of £12.5 million in 2015 from a £9.9 million loss for the previous year, according to the company’s most recent publicly available set of accounts. A positive year for cash flow helped deliver a reduction in the group’s net debt to under £53 million in December 2015 from £65.5 million a year earlier.

The company forecast in the accounts, signed off on last April, that it was “confident that 2016 will bring further improvement in profitability of the business through revenue growth and further operational efficiencies”.