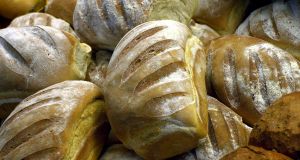 With tariffs, the rate the EU charges may add eight to 10 cent to a loaf of bread in the Republic. Photograph: Frank Miller

Brexit could put an extra 10 cent on the price of a loaf in Ireland, the milling industry warned.

Eighty per cent of the flour used in the Republic for baked goods and other products comes from the UK, and may face a significant tariff if a trade deal is not struck between Britain and the EU.

If Irish producers switched suppliers to those operating within the EU to avoid trade barriers, then jobs would be lost in the UK, according to the National Association of British and Irish Millers.

Director Alex Waugh said: “If tariffs were to be introduced, the rate the EU normally charges would add eight to 10 cent to a loaf of bread in the Republic.

“It is pretty inflationary, assuming the flour continues to come from the same source as now.

“Once you introduce a tariff everything changes, so the likelihood is that the flour currently coming from the UK would come from somewhere else in the EU where there would not be a tariff.”

He said the result would be jobs lost in the UK.

Flour is sent from the UK to Ireland to be refined into anything from bread and cakes to coating for chicken nuggets and battered fish.

It is often exported back to the UK as part of finished goods.

Over the last 20 years, the UK has become the main supplier of milled flour to the Republic. The only mill in the Republic is at Portarlington in Co Laois.

Half of the flour used by Irish bakers is milled on the island of Ireland, a significant proportion of that from Belfast, and the rest comes from England, Mr Waugh said.

He added: “What we are seeing is politicians trying to respond to different pressures in different places. From the point of view of our business, maintaining that tariff-free trade between the UK and Ireland is crucial.” – (PA)