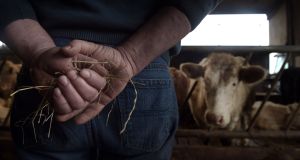 The Department of Agriculture’s media briefing on climate change yesterday was noteworthy for two reasons.

First, the acknowledgment by officials that beef farming is the main driver of carbon emissions from agriculture is rare.

The beef lobby is a potent force in Irish politics and officialdom has been slow to point the finger at its less than green credentials.

Another factor raised was the relatively high number of part-time farmers with small herds, which makes the sector inherently less efficient.

With all the talk of expanding milk production in the post-quota era, the distinction between beef and dairy, in emissions terms, is often lost.

A recent suggestion by Prof Alan Matthews, one of the State’s leading agricultural experts, that Ireland would be financially better off getting out of beef farming, caused a near explosion in the Irish Farmers’ Association (IFA).

Prof Matthews based his thesis on the fact that most Irish beef farms were not financially viable without subsidies from Brussels.

So irked was the IFA that it objected to Prof Matthews’s appointment to the Government’s climate change advisory council.

This leads us to the second noteworthy aspect of yesterday’s meeting, namely the focus and prominence the department is now giving to forestry which, incidentally, Prof Matthews believes many farms might be better off switching into.

For historical reasons, Ireland is the least afforested country in the EU, with only 11 per cent coverage compared to a European average of 32 per cent.

The department obviously realises a huge of amount of marginal land could be used to plant trees, much of which is used for beef production.

Equally, if the next EU emissions deal re-admits forestry as an important mitigation tool, Ireland could be one of the main beneficiaries, having planted relatively more trees since the 1990 base year than most other countries.

Despite repeated suggestions that agriculture was not seeking a “free pass” in the upcoming Paris negotiations, it’s clear the department is lobbying hard to have Ireland treated as a special case because of the size of the sector here.