Beef exports to US unlikely to hit targets until licence extended 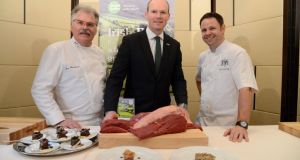 Minister Coveney is joined at the official launch of Irish beef on the US market by two-star Michelin chef, Paris-based Jean Paul Jeunet, and Dublin-born Cathal Armstrong

Irish beef exports to the US are unlikely to hit targets set by Minister for Agriculture Simon Coveney until the licence is extended to include mince, according to Eddie Punch of the Irish Cattle and Sheep Farmers’ Association.

His comments come as Larry Goodman’s ABP Foods shipped its first consignment of beef to the US this week. The beef will go on sale in 12 high-end New York restaurants this weekend.

Mr Punch said “there was scope to sell a lot of beef to the US” on the basis of record high US prices and the current weakness in the euro.

However, he said prime steak cuts represented only a small part of the carcass, roughly 10 per cent, and the real value for Irish producers will come when they can ship mince, known in the trade as manufactured beef.

Until that point, he said Minister Coveney’s target of exporting 20,000 tonnes of Irish beef this year, worth up to €100 million, and more in future years would appear “somewhat optimistic”.

“The real measure of success will be how much increased trade with the US impacts on price paid to farmers,” he added.

The Department of Agriculture denied there was a hold-up in extending the licence, insisting the process of normalising trade relations takes time given the differing rules around production.

“The department is working with industry here on putting in place measures to meet a number of US technical requirements so that this trade can commence as soon as possible,” a spokesman said.

Nonetheless, it appears hygiene protocols surrounding the production of manufactured beef still need to be bridged. The US authorities are understood to be insisting on additional tests for E coli before allowing access to Irish mince.

ABP Food’s deal with US food distributor Sysco was the first contract secured by an Irish producer since the lifting of a ban stemming back to the BSE crisis of the 1990s.