A family business that just keeps on growing 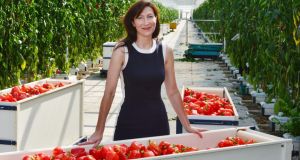 If you have been tucking into some strawberries and cream during the recent fine weather, there is a one-in-two chance they were Caroline Keeling’s. The Keelings group, which she runs with her two brothers David and William, is based in St Margarets in north Co Dublin and grows around half of the annual Irish crop of 300 million strawberries. And each one is picked by hand.

“We are very very passionate about our strawberries and raspberries. We eat them ourselves all the time. We are constantly trying to drive improvements,” she says, in a slightly too obvious reinforcement of the “Taste the Passion” message behind the Keelings retail fruit brand. But passion is as good a word as any to explain how over three generations her family turned a north Dublin fruit farm into Ireland’s largest horticultural business turning over €300 million and exporting produce and services as far afield as China.

“The business started with my grandparents [in the 1930s]. It was a family farm producing a whole range of products; strawberries, apples, tomatoes those kind of products. My father and his brothers then got involved in it and my father Joe would have set up the trading business in the Dublin fruit market in 1973,” she explains.

The company now has five divisions; retail, Farm Fresh, market, international and solutions. The retail and market divisions, which are run by her younger brother David, account for around 60 per cent of sales. “That’s the really exciting part of our business. That’s the part where we have launched the brand. We have the Keelings brand on all of our berries. That’s been a great experience,” she says.

The decision to introduce their own brand came after “a good bit of research on whether there was a value in investing in a brand in Ireland, ” she says. The answer was a very definite yes . “A lot of the feedback we got from consumers was that they did want to directly interact with the producer”. The Keelings brand was the fastest growing brand in Ireland last year and is now ranked 35th here by Kantar Research.

Keeling’s other brother, William looks after the group’s property interest which include Food Central, a 140-acre food park adjoining the farm. The park is meant to be a centre of excellence for food that allows companies to come together to achieve economies of scale in areas such as transport. The other three divisions are run directly by Keeling, who is also the chief executive officer of the business.

They include Farm Fresh, which supplies the catering and hospitality sectors. In a somewhat unusual arrangement the business has been sold to Pallas – the Limerick based food service business owned by US group Sysco – but is still managed by the Keelings group. “To ensure the profitability is maintained,” explains Keeling.

Our roots are in growing
The international division comprises two companies in the UK and one based in Holland that trade fruit and vegetables across the globe. It accounts for the bulk of turnover outside of the retail and market divisions.

“Basically, what we would do is buy apples in New Zealand and ship them to China. Egypt was a classic example this winter. We bought a lot of strawberries in Egypt and shipped them to Hong Kong and some to Ireland, “ she explains.

Trading with China is done from the Dublin office and clearly appeals to Keeling. She explains how in May the group shipped several pallets of strawberries in heart shaped punnets to Hong Kong-based retailer ParknShop.

The international business is built on a base of growers in 42 countries – of which Keeling has visited 38 herself . “Frequently, we are not buying the full range from a grower. We might only want a particular size [of fruit] for the Irish or the UK market, but the Chinese might want a different size.”

It sounds a bit like the business of Fyffes, their better known peer. Not so, says Keeling, with a smile that betrays a intense rivalry. “We have a different strategy. We have a different way of working. In Ireland particularly we have our own production. We grow ourselves. Our roots are in growing. I think that when we meet with growers we understand them. I think it gives you a much stronger relationship with a grower when they know you are [a grower] and the two of you sit and bitch about the weather”.

In the early 2000s, Keelings decided to write its own software to manage the business having failed to find a suitable off-the-shelf product. “We looked around and we didn’t find one that delivered the kind of information we wanted; the quality, the speed and the accuracy. So we wrote our own system”.

In 2011, a separate company was formed to sell the system to other producers. “Its very, very successful, Ahead of our own expectations. We are live in one Dutch company and we have licensed the software to a Chinese company. Last year, we signed the deal and they should be going live by the end of the summer,” she explains.

China’s largest flower grower has also come on board in a half a million euro deal. “There are amazing opportunities for that business,” predicts Keeling.

“Our strength is that we actually understand how to run the business. We are not just selling them software. That is why it is called Keelings Solutions. We are selling them a solution and it is helping them dramatically drive process improvement in their business,” she says.

“Over the next five years we believe that division will be very strong for us. We are hoping for significant growth particularly in the European and Chinese markets.”

It is a very different business from growing strawberries, but the margins are considerably better. “We can manage the European [support] from our Irish office and we have gone from six employees to 22 in the software business, and we’ve got a company in China that is going to help us with some of the the initial support. User support rather than code. They are also helping us with training as most of my staff don’t have Chinese.”

Keeling says she is learning bits and pieces “to be polite” before rattling off what sounds to the untutored ear a fairly fluent phrase to the effect that I want to speak Chinese but I am too busy.

The bossy one
Keelings is owned jointly by Joe Keeling (who recently took up the role of chairman of Horse Racing Ireland) and his three children. It is unlimited and the shares are held through Isle of Man entities. As a result, it does not have to file annual accounts. Keeling is happy to disclose the group’s turnover, but replies to a question about profits with a laugh and the comment “not enough” before expanding her answer slightly: “Sorry we don’t share that”.

Keeling’s ascent to the helm of the family business was not ordained. She went to UCD to study science after school. She had planned to take a degree in physics but switched to chemistry. “I loved chemistry so I did my degree in chemistry and wasn’t quite sure how that was going to earn me any money, so I then did a masters in food science because I have always loved food and chemistry in food science is very useful.”

Her first job was with Green Isle. “I had a great time there until Dad asked me would I join the business for a couple of years and see if I liked it. That was 19 years ago. I definitely got bitten by the bug.”

She joined the family business as technical manager and spent four years in the UK where Keelings had a banana business. It was “absolutely fantastic fun. We were growing the business at an incredible rate. We were constantly doubling”.

The banana business was sold to Chiquita in 2003, with the proceeds used to buy out a 25 per cent stake in Keelings held by Chiquita. However, Keeling had returned to Ireland in 1998, and in 2002 she was put in charge of what was the precursor to the retail division.

It was around that time she realised she was more businesswoman than scientist, although she admits to still having “science tendencies”.

“I had no real training in business other than sitting at the kitchen table. Where you do pick up a bit,” she explains.

Most of what she learnt was through direct on-the-job experience.

“I was very lucky being a family member. I was brought to a lot of quite serious meetings as soon as I joined, which was really good for me because I could go to the meetings without the accountability for the result.”

She clearly learned enough to earn her father’s confidence and the stewardship of the business was gradually handed to her over the past five years. It has also seen her shortlisted this year for the Entrepreneur of the Year award run by accountants Ernst &Young.

Did her father find it hard to let go? “I would say its challenging. I don’t know if it’s easier, father-daughter. I am not really sure,” she responds.

“We did it over a period of time. I think both of us – for want of a better term – wanted it to work. That kind of helps.”

“We will always heed his advice,” she says , but the day-to-day running of the business is left to the three siblings.

One last question cries out for an answer. How did she beat her brothers to the top job? “I am the bossy one!” she replies with another laugh.