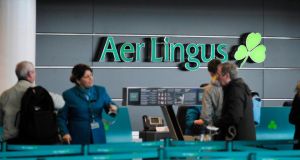 IAG and Aer Lingus continue the battle for hearts and minds on the merits of the bid. Photographer: Aidan Crawley/Bloomberg

The IAG bid to take over Aer Lingus has now moved into the trench warfare stage, with information flying between the company and the committee appointed by the Government to advise it. Meanwhile IAG and Aer Lingus continue the battle for hearts and minds on the merits of the bid and why the Government should sell.

Before the recent IAG offensive the bid to get the Government to sell its 25 per cent stake appeared to be dead in the water. Clearly, given reports that some Fine Gael TDs are supporting the bid, Willie Walsh has made some ground.

But is it enough? IAG will be mulling over the latest comments from Minister for Agricultural Simon Coveney, who said that he suspects that the government has not received an offer that is “persuasive enough”. Is this a negotiating ploy to try to wring a few more concessions from IAG? Or is it preparing the way for rejection?

Among the issues political sources say remain in play is the status of the guarantees IAG has offered to allow the Government, in tandem with local chambers of commerce, to block any sale of the Heathrow slots.

The Government is believed to be seeking assurances on the cast-iron nature of this and it is not clear whether they would accept the idea of the involvement of the chambers of commerce.

The cabinet is expected to review where the bid is at when it meets on Tuesday, though it is not clear that the committee, comprised of senior civil servants and advisers, have yet finished their work.

With the Fine Gael conference this weekend and Labour next weekend, clear indications may well be sent if, indeed, a rejection is on the way. The issue is particularly sensitive for the Labour Party, who will be closely monitoring the view of the trade unions.

IAG has made some ground, but the Government still seems loath to sign up. If it does not, the question is whether Willie Walsh will decide to launch an unconditional bid, with the goal of gaining control of the airline and leaving the Government there as a minority shareholder.

If he does, it might be a way out for the Government, even though Walsh would then be under no obligation to offer any guarantees or assurances. That’s politics!