The Importance of Being Earnest

Gerald Barry’s opera is full of vibrant colour and fun. There are no dull moments 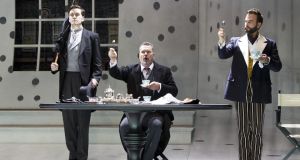 Christopher Cull, Stephen Richardson, Peter Tansits in The Importance of Being Earnest

The Importance of Being Earnest
Millennium Forum, Derry
*****

There is plenty of black and white in the new NI Opera and Wide Open Opera production of Gerald Barry’s The Importance of Being Earnest, jointly commissioned by the Los Angeles Philharmonic and London’s Barbican. The opera includes a surprisingly male Lady Bracknell (Stephen Richardson), the tail coat of his morning dress enhanced with a black bustle. The lasting impression, however, is of vibrant colour, fun, freeze-frame lighting flashes and no dull moments.

Barry has pruned and modified Oscar Wilde’s masterpiece, retaining much of its “trivial comedy” and often adding to its satirical impact. Wilde claimed his play was for “serious people”, but Barry’s operatic re-imagining appeals to young and old, serious and less so.

Director and designer Antony McDonald makes it more than a visual treat: every choreographed movement adds to the integration of plot and music or enhances some of the absurdities. The lighting is perfectly judged.

Wilde’s contribution cannot be underestimated, but Barry’s exhilarating music, often conveying the text in disjointed syllables, enhances the illogical, the farcical, and the tempo of the words. None of his distinctive musical language – with its fast scales, jagged melodic lines and rhythmic quirkiness – is downplayed, though he does manage to include Auld Lang Syne and a couple of reinterpretations of Schiller’s Ode to Joy.

Barry makes huge demands on his eight singers and the 21 musicians of Crash Ensemble, which doubles as a speaking chorus. The instrumental and vocal writing is fearless and rich. There are moments when the singers’ words are difficult to make out, but this is a great team. Conductor Pierre- André Valade has a clear vision of pacing and balance. Everyone rises to the occasion, with hysterical results.

Mauricio Kagel, one of Barry’s teachers, would surely have relished the absurdist megaphone duet for Cecily and Gwendolen (Aoife Miskelly and Jessica Walker), or the 40 dinner plates broken rhythmically to provide a percussive underlining to their fierce argument. A must-see production.