‘Suddenly, people cared about how they looked’ 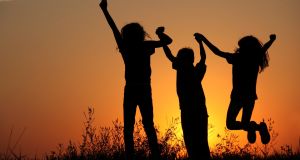 ’It wasn’t like this in primary school. Really, it wasn’t. I used to have light-up shoes. I had a friend whose hair was cut up to her ears.’ Stockphoto: Getty

In “The Picture Of Dorian Gray, ” Oscar Wilde writes; “All influence is immoral”. This is so because ;”to influence a person is to give him one’s own soul. He does not think his natural thoughts, or burn with his natural passions. His virtues are not real to him.”

As an Irish teenager living in a world of social media, I was struck by the veracity of this quote. This book was published in 1890, yet this message applies just as strongly in 2020.

Hair isn’t where the resemblance stops. I begin to notice the same schoolbags, accessories, water-bottles and shoes on every student in the classroom.

I frantically look around the classroom for any sign of nonconformity, and can find none. I am driven to look into my own reflection in my school iPad, hoping to find evidence that we are not all the same.

However, in my camera, I see the same face as my classmates staring back at me.

It wasn’t like this in primary school. Really, it wasn’t.

I used to have light-up shoes. I had a friend whose hair was cut up to her ears. The person sitting next to me wore a colourful hat to school everyday. The boys had mohawks and long hair, with fun shapes shaved into the sides of their head.

Nobody cared that people would judge them, because people simply wouldn’t.

My generation was one of the first to use social media. Suddenly, people cared about how they looked.

The latest style of football boots was advertised on a footballer’s Instagram account. Everybody began to care what shoes they wore.

An photoshop-using blogger promoted a strict fitness regime, because skinny is good. Everybody began to care what type of body they had.

The most influential YouTubers had certain mannerisms, and used certain lingo. Everybody adopted these mannerisms and words too.

The worst part; if you didn’t follow the crowd, you were left out of the crowd.

Being a carbon-copy was a better fate than being an outcast, so you ditched your light-up shoes and joined the herd.

The overwhelming influence of new trends, crazes and fads have changed us to such an extent that we have become unrecognisable.

My generation protests against wearing uniforms to school, but happily wear a uniform of style, manner and expression created by the influence of the media.

We use these uniforms to hide our true personalities, scared of being outcasted. We conform to the personality that the media says that we are supposed to have. Our parents experienced this, but due to our daily exposure to online influences, we are experiencing it on a colossal scale.

Influencers have given us their thoughts, their passions and their souls. Our virtues are no longer real to us, but a mere reflection of those of our neighbour.

Influencers have given me Nike shoes in exchange for my light-up ones.

I’m no Hercules, no Cúchulainn, no Greta Thunberg.

I take the trade.

The author’s name is with the editor