With no points race, the chance to mix modules, and courses taught through English, many are seeing past the CAO 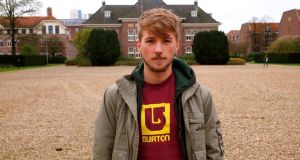 Increasing numbers of Irish students and their parents are looking beyond Ireland for higher-level education: not just the traditional hop across the pond, and not just in search of hard-to-access programmes such as medicine and veterinary.

Patrick Orr has just started a three-year degree programme in liberal arts and science in Utrecht. As he approached his Leaving Cert in Sandford Park School in Ranelagh, Dublin 6, he became increasingly frustrated with the offerings available through the CAO.

“I come from a family of doctors and I’m interested in medicine, but I didn’t want to tie myself to a career too early because I also have a keen interest in the arts,” he says. “I was looking for a course that was more open and that combined science and humanities and an element of choice. I just couldn’t find it in the Irish system.”

Orr’s aunt lectures in linguistics in Utrecht, in the Netherlands, and she drew his attention to a programme in her college that offered all the subjects he was looking for and the chance to specialise as he went along. The course is taught through English, along with hundreds of degree and masters-level courses right across Europe.

“I have so many interests and don’t want to pigeonhole myself into a profession at 18 years of age,” says Orr, who also has a keen interest in music and has worked as a band technician as well as performing. “This year I’m studying philosophy, literature and physics. I’m also taking a module in research and academic skills. Over the course of this year I’ll take modules in anthropology, mathematics and sociology. There are loads of options and I don’t have to specialise until further into the degree. It’s very exciting to consider all the possible qualifications I could come out with.”

Travelling to the Netherlands wasn’t a major upheaval for Patrick; he’s a keen traveller and has spent many summers with relatives in Europe. “I really liked the idea of studying in the Netherlands. It’s an interesting country and the system is well-developed for this kind of teaching. This university seemed the best one, although I applied to others as well. I was offered a place on my chosen course in Utrecht even before I sat the Leaving Cert.”

Orr’s place in University College Utrecht was based on an interview which he did via Skype, a “letter of motivation”, a letter from a sponsor and an aptitude test. His results in the Leaving Cert were considered, but only as a matriculation standard; he needed to get a certain amount of passes and honours rather than a points tally.

Degrees in Europe
This is one of the reasons so many Irish students – more than 600 this year – are considering degree courses in Europe, says Guy Flouch, the head of of Eunicas, a UK-based application support service that guides students through the process of applying to universities in Europe.

“The entry requirements for European universities are much more reasonable than here. In the Netherlands, for example, universities are forbidden by law to select students based on grades. Third-level education is regarded as a right.

“However, once students start a course they have to work a lot harder to stay on it. Skipping lectures is a common enough thing in Ireland; it wouldn’t be tolerated in many of these European universities. Students have to apply themselves from day one.”

Orr says his work schedule is quite tough and he’s had to hit the ground running, from an academic point of view. “Everyone around me is very motivated. About half of the students here have travelled from other countries to study and they’re focused on getting a good degree. It’s good for me because I was very laid back in school and being in a culture of hard work is keeping me on task. I’m only a couple of months in and I already spend a lot of time in the library. The social life is very good here as well, so I have to balance it all out.”

Orr didn’t know anyone coming to Utrecht but he has since met Irish students from two other Dublin schools, Belvedere College and St Andrew’s. “I have friends from 20 different countries already, people I sit in the dining hall with, cook with and go out with. It’s amazing. Everyone speaks English, or wants to learn it, so it’s the ideal environment for an Irish person.”

Orr’s parents and younger sister found it hard to let him go, he says, and they all made the journey on the ferry with him. However, he was immediately assigned accommodation and found it very easy to fit in. “I actually enjoyed walking into a classroom of strangers from all over the globe. At least I didn’t have to contend with a bunch of lads talking about Gaelic.”

By the third semester of this year Orr will be expected to have put some shape on his degree, or at least to choose his major subject. He plans to take all the science modules in the meantime, and a number of humanities and social science subjects. He’s getting a sense of what he wants already, he says.

“I’m very interested in having a minor in philosophy and a major in physics. With the hard sciences, especially in the realm of quantum physics, there are so many different interpretations of what is going on and I think a training in philosophy is useful. It gives you an analytical mindset that many employers value as well.”

Emily O’Reilly’s son Daniel has recently started a course in the Hague University of Applied Sciences. He didn’t go there because his mother has just been appointed European Ombudsman, but because he didn’t get what he wanted through the CAO.

“I was listening to the radio in August and I heard a piece about Eunicas. I’d never heard of it before and I’d never considered study in Europe as an option,” says O’Reilly. “We looked into it and two weeks later Daniel was on a flight to the Hague to start a degree course in European studies.”

Two months in, O’Reilly says the move has been the making of him. “I realise it wouldn’t work for every student. Daniel was able to take up a course he wouldn’t have had the points for in Ireland, but so far he is managing it very well. It mightn’t be advisable to take up medicine on the strength of a couple of Cs, for example, and some students wouldn’t settle so easily outside Ireland. But for us it has worked out really well, and financially it’s a better option than studying in Ireland. Daniel’s fees are lower than the Irish student registration charge and we probably would have been paying for accommodation anyway.”

Flouch lives in Ireland, where he has worked for many years in careers counselling. He says growing numbers of Irish students are now seeking arts, humanities and social-science programmes in Europe. It used to be health-science courses that attracted Irish students overseas, when they couldn’t get a place on high points medicine, veterinary, dental and physiotherapy courses here. This year he has seen a diversification into other disciplines, and students coming from all over Ireland, not just from a cluster of private schools in Dublin.

“Liberal arts is a new trend but Irish students are looking to Europe for courses in international law, gaming, business, fashion design and a whole host of other areas. It’s really taken off in the last year in particular. There are more than 800 degree programmes taught through English across Europe now. When you consider that there are several universities the Netherlands that rank higher than the best-ranked Irish university, and students don’t need huge CAO points to get in, you can see the attraction.”

“It’s a great adventure for any student with an interest in travel and since so many of them will need to have a global perspective on the jobs market anyway, it makes sense to start early and build an international network,” says Flouch. “Irish students have the highest mobility rate in Europe, after Luxembourg, and with so many Irish families moving abroad to work now, we are constantly getting inquiries about accessing universities outside Ireland. It used to be all in the health sciences, but it’s opening up now as people wake up to the fantastic opportunities that are available.”

Students can find out more about studying abroad at an exhibition in the O’Reilly Hall, UCD on March 29th, 2014. See thestudentworld.com; eunicas.ie