Clocks to be turned back by an hour from 2am on Sunday, but EU pushing to end seasonal time switches from next year 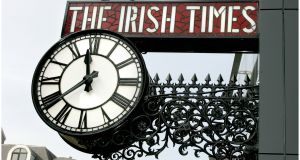 With clocks set to be turned back by an hour from 2am on Sunday - providing more daylight in the morning, but less in the evening - it is unclear what benefits any move to abolish the time change would have. File photograph: David Sleator/The Irish Times.

Sleep experts have questioned the benefits of not putting the clocks back this month, following calls for the Government to halt the annual change of time.

The EU is pushing to end seasonal time switches from next year and Social Democrats co-leader Róisín Shortall has suggested that leaving time unchanged this year could help people to better cope with the Covid-19 pandemic.

With clocks set to be turned back by an hour from 2am on Sunday - providing more daylight in the morning, but less in the evening - it is unclear what benefits any move to abolish the practice would have.

Motty Varghese, physiologist at the Sleep Therapy Clinic in St James’s Hospital, Dublin, said the question is subjective and its impact depends on the individual. He explained that three different clocks apply to most people – the social (or actual) clock; the sun clock; and the body clock.

“When we change the time every year we are really only changing the social clock,” he said. “It does take us a bit of time to catch up to the changes, a week or 10 days.”

International research has pointed to an increase in car accidents and hospital visits in the days immediately following the one hour change, as people attune themselves to the altered times.

Mr Varghese said it boils down to whether extra activity in the evenings – bolstered by increased daylight – is more important than getting more sleep, which is aided by darker evenings. He said that although people suffering with depression and seasonal affective disorder can benefit from having brighter mornings, this normally depends on the individual in question.

The EU proposal under consideration could see an official directive to discontinue seasonal clock changes from next year. According to the World Economic Forum, scientists from the American Academy of Sleep Medicine support such a move, saying the changes cause disruption to circadian rhythms – the internal process that runs the sleep/wake cycle.

Research carried out by the Department of Justice last year found although the public would generally favour brighter evenings in the winter, an overwhelming majority are wary of a policy that would result in two time zones on the island of Ireland. The Government has supported calls for a full impact assessment ahead of any final decision.

Ms Shorthall suggested last week that summer time should be maintained to make life a bit easier for a public already reeling from Covid-19 related restrictions.

“People are under a lot of strain and there was mention that things are going to get more difficult at the end of the month when the clocks go back and we go into winter time,” she said.

Prof Dan Healy, consultant neurologist at Beaumont Hospital, said it does not take long for the brain to adjust to a one hour difference in the sleep cycle – for instance people who travel to France for a holiday find it much easier to adjust to the time difference than someone who travels home from the west coast of the US.

“Our own DNA also modifies the sleep-wake cycle. Some people run clocks that wake a little earlier, [a] ‘morning person’ and others later, [a] ‘night person,” he said.

“That genetic variation is really hard to modify. It is not taken into consideration in the working world; you have to be at work at nine in the morning and that suits morning people. They have lower levels of depression and more workplace successes and crucially find it easy to get up in the morning.”

Deirdre McSwiney, a sleep disorder expert, said she experiences an increase in queries from people around the time of clock changes but does not believe Shorthall’s idea would make any significant difference.

“It only takes your body a day, if not two days, to adjust,” she said.

A Brief History of Time Changes

In Ireland, “summer time” was introduced in 1916, beginning the annual tradition of changing clocks to manipulate the shifting patterns of daylight.

EU legislation on summer time was introduced in 1980 to harmonise the approach, but took four years of negotiations. Even thenm it took nine separate directives, adopted over 20 years, to implement an EU-wide system.

In September 2018, the European Commission published a proposal to abolish seasonal clock changes, with the move ending next year. Members states will remain free to choose their standard time.

Negotiation with the Council of Ministers is still necessary and final approval will be a co-decision of the EU Parliament.

According to Mr Varghese, the scientific community has always been against daylight savings in March as it artificially manipulates the body clock based on people’s interaction with natural light.