Like a Boss: Don’t go to this movie. You deserve better 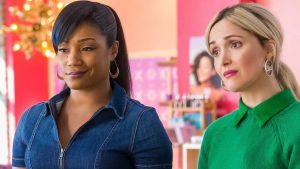 Tiffany Haddish and Rose Byrne in Like a Boss

Best pals Mia Carter (Tiffany Haddish) and Mel Paige (Rose Byrne) live together and work together at the small make-up venture they founded together. Mia is the creative juice and Mel crunches the numbers between booty calls and boozy visits to their larger gang of girlfriends.

Claire will get Mia and Mel’s signature product “The One-Night Stand Kit”, and will pay off their six-figure debt in exchange for 49 per cent of the business. And something something they have to stay friends? Or something? I may not have a head for business deals, but evidently, neither does this film.

Three writers – we won’t name and shame – are credited with concocting the story for Like a Boss. So where the hell is it?

Miguel Arteta, the indie director behind such tart delights as Chuck & Buck and Beatriz at Dinner, fails to make an auteurial dent in the flimsy material. Haddish and Byrne are game for anything, even karaoke performances that sound like dying forest animals.

Jennifer Coolidge and Billy Porter bring similar energies to underwritten material. Porter’s extended exit from a restaurant provides the film’s sole laugh.   Everyone in this movie deserves better than this movie. And so do you.