The short story is the perfect medium to deliver a quick, intense burst of fear 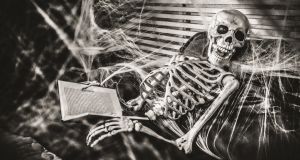 Horror works most effectively in concentrated, intense bursts – which is why the short story has always been its great literary medium. The horror short story flourished in great anthologies, often containing unforgettable works by forgotten writers, or by familiar writers straying into unfamiliar territory, as well as by established genre titans. Here are 10 of the best – stories which have haunted me for years, which I can’t get out of my head. Think of them as doors into secret gardens, or haunted attics, or forbidden cellars. Go and search them out - if you dare.

Robert Aickman – Into the Wood (1968)
Margaret Sawyer, the wife of a prosperous Manchester building contractor, is bored and unsatisfied with her life. She travels to Sweden on a business trip with her husband, where she finds herself staying overnight at the Kurhus, a sanitorium for insomniacs, some of whom have not slept for years (there is a young girl who has never slept in her life). Insomniacs, she is told, are unearthly and mysterious, and often seem to acquire foresight; they are like trolls, like lost souls, like witches, like vampires. Sleepers cannot live with them for long, and drive them out. And so they find themselves in the Kurhus, where they wander the labyrinth of paths in the wood all night. This is horror for the connoisseur. Aickman was a magnificent writer of short fiction at its most unsettling and uncanny – in the Freudian sense of not being at home with oneself. Caught in the right mood, his stories are unforgettable. Faber recently did the world the inestimable service of bringing many of his books back into print.

Conrad Aiken – Mr Arcularis (1931)
A middle-aged Harvard professor, recovering from surgery, takes a voyage to Europe on a ship which, he learns, is also carrying a corpse home to Ireland. The ship is fogbound, surrounded by icebergs. Mr Arcularis begins to dream that he is walking through the stars, and starts sleepwalking. He is constantly cold. On board the ship, he meets people who remind him of other people: a travelling companion who looks like a woman he met at the hospital; a doctor who looks like his father. He encounters a chess-playing clergyman. He keeps hearing the same piece of music over and over again. Conrad Aiken’s dazzlingly literary story is in a tradition of metaphysical sea-stories, from Poe to Melville to Conrad. Aiken was a distinguished poet and a friend of TS Eliot, with whom he shares a Modernist sense of contemporary humanity as the walking dead. Profoundly frightening (especially for middle-aged professors) and unbearably sad.

Sir Andrew Caldecott – Branch Line to Benceston (1947)
A London music publisher travels by train to a non-existent seaside resort called Benceston, where he kills his hated business partner, and is found guilty of murder. Back at home with his friends, he awaits the appointed hour of his execution in what he thinks is an alternate reality. Andrew Caldecott took to writing fiction late in life, after retiring from the colonial service – he was governor of Hong Kong and then of Ceylon in the 1930s and 1940s. What’s striking about Branch Line to Benceston is not just its uncanny sense of the possibility of living two different lives in two different realities at the same time, but also its contemporary postwar setting of city commuters and Green Belt suburbanisation. Could it be that what’s really terrifying here is not the unreal branch line but the real main line, whose commuters all take the same train every day for the rest of their lives?

Oscar Cook – His Beautiful Hands (1931)
“Mr A”, a celebrated concert violinist, is irresistibly drawn to a Paulina, a Javanese manicurist, who cares for his fingers like no one else. Paulina becomes his lover, and gets pregnant. One by one, Mr A’s fingers start to get infected. Then they start to rot. Then they fall off. Oscar Cook was a kind of pulp Conrad, using his decade running a large chunk of Borneo as the basis for a series of memorably gruesome and ghoulish tales of colonial horror, generally featuring cannibalism, sexual revenge or unspeakable rites. This is a seriously nasty and perverse little number. You’ll feel like washing your hands afterwards – but maybe it’s best not to.

Amelia B Edwards – The Phantom Coach (1864)
A honeymooning lawyer, out walking on the Yorkshire moors, gets lost in a snowstorm, and takes refuge in the house of a reclusive scholar. As he is shown the way to the post road, he hears the tragic story of a mail coach accident nine years previously, in which all six people on board were killed. Out of the night, he sees a mail coach coming . . . Edwards’s classic ghost story is a staple of anthologies, one of the best of a great tradition of Victorian women’s ghost stories. But what lingers in the mind here is not the phantom coach itself (we could all see that coming), but the recluse, a white-maned magus living alone on the moors, whose walls are covered in occult symbols, and who seems to summon up the story’s supernatural apparition.

Stanley Ellin – The Specialty of the House (1948)
A businessman takes a colleague to Sbirro’s, “the restaurant without pretensions”, where the clientele is very select and the food irresistible. The house speciality, Lamb Amirstan, is rarely served, but is the most delicious meal ever created . . . This is the best story ever published in Herbert van Thal’s long-running Pan Book of Horror Stories series, and was brilliantly filmed in 1959 for Alfred Hitchcock Presents, with Robert Morley as the hapless diner.

WF Harvey – August Heat (1910)
On a stifling day, an artist draws a picture of a man on trial. He goes for a walk, and finds himself at the workplace of a monumental mason. The mason has the face of the man on trial – and he’s working on a gravestone with the artist’s name on it. Is there anything scarier than precognition –the uncanny sense of being haunted by the future, or that you have been here before? Harvey’s startling little masterpiece is the best story of its kind.

Marghanita Laski – The Tower (1955)
Driving through Italy, a woman happens upon the Tower of Sacrifice, a high tower standing alone outside Florence, reputedly built by a Renaissance Satanist. Rather against her better judgement, she stops the car and decides to climb the tower. Laski was a brilliant, chainsmoking journalist, intellectual, biographer and lexicographer who somehow found time to write fiction as well. Best not to say too much about The Tower, as the pleasure’s all in the reading. It’s a strong contender for the scariest story ever written.

MS Waddell – The Little Girl Eater (1964)
A man is trapped by a falling girder under a pier on a beach. The tide is coming in. He sees a little girl, who goes for help – but her mother’s lover tells her that this is the Little Girl Eater, who lives under the pier. This seriously mean-spirited and unpleasant tale is a bit of a curio. It’s credited to “Septimus Dale”, but seems to have been written by the Belfast children’s writer Martin Waddell (who borrowed the pseudonym from a character in Leslie Charteris’s Saint novels). One of the nastiest stories ever written. It’s sensational.

Edith Wharton – Afterward (1910)
An American couple moves into a grandly dilapidated Dorset house that is haunted by a ghost which, they are told, you only recognise as one long after the fact. Edith Wharton is by far the best-known, most straightforwardly canonical writer on this list. But, like Henry James, with whom she is often associated, she was drawn to the ghost story, as well as to tales of American cultural encounters with Europe. Afterward is both. It’s another unforgettably uncanny tale of precognition, but it is also a politically thought-provoking story with a serious economic point of view. Ned Boyne, who has retired to Dorset from the US after making his fortune in mining, is writing a book on “the Economic Basis of Culture”, and may have come to his life of cultured leisure through a fraudulent business deal which had tragic consequences.

Darryl Jones is the author of Sleeping With the Lights On: The Unsettling Story of Horror (OUP, £10.99)