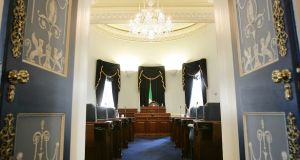 In February this year students at UL passed a motion calling on the the University of Limerick Students’ Union (ULSU) to lobby the next government on extending Seanad voting rights to UL graduates. Photograph: Alan Betson/The Irish Times

Graduate Equality, a joint campaign between Dublin City University (DCU), the University of Limerick (UL) and Dublin Institute of Technology (DIT), aims to have the results of a 1979 constitutional amendment implemented.

The 1979 referendum, which allowed voting for the current six Seanad university seats to be opened to graduates of any higher education institution within the state, was passed by a 92 per cent majority.

However the amendment has never been implemented by the Oireachtas. As a result, only graduates of Trinity College Dublin (TCD) and the National University of Ireland (NUI) colleges are entitled to vote in the Seanad elections for the six university panel senators.

In February students at UL passed a motion calling on the the University of Limerick Students’ Union (ULSU) to lobby the next government on extending Seanad voting rights to UL graduates.

As the campaign began, Ms O’Donnell explained: “The three students’ unions decided to work together on this campaign to highlight the inequality and unfairness evident in those who are eligible to vote for the Seanad University Panel and those that are not. The fact is that most graduates are not even aware that they are being denied the right to vote.”

Mr Harkin added: “It’s important to speak out on issues that affect not just our students but our graduates. Ideally we will reach a time when every citizen has the right to vote, however we need to start somewhere. The lack of reform in this particular area is evidence of the highest disregard for the education that these graduates receive.”

Meanwhile, DIT’s Ms Golden said of the current Seanad election process: “It puts the graduates of Trinity College Dublin and the National University of Ireland on a platform above the graduates of other institutions. Why should a degree from Trinity or UCC entitle you to different rights than one from DIT or DCU?”

The Graduate Equality video, which also features contributions from Emeritus Professor at DCU, Dr Colum Kenny, encourages people to lobby their TDs and Senators to implement the reforms.

When she brought the proposal, which was passed unanimously, to UL students last February, Ms O’Donnell said: “There are six Seanad seats that are meant to represent third level education. The only people who can vote for them are graduates from Trinity, UCD, NUIG, Maynooth and UCC.

“So UL and DCU are the only two universities who are unable to vote on those six senators who are meant to represent third level education, along with all the ITs as well of course.

“In 1979 there was a referendum that brought in legislation that basically said that the Oireachtas could add more universities or third level institutions to this, they’ve just never used that legislation, they’ve never enacted it and basically all UL can’t vote for Seanad elections and get those six senators to represent us.”