Restaurateurs share trade secrets of the ‘worst night of the year’ 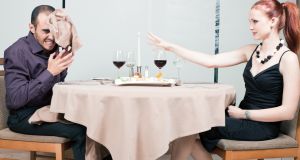 On February 14th, restaurant staff place bets on who will storm out first from a St Valentine’s date

It’s Elaine Murphy’s go-to St Valentine’s joke. “So table for three, yeah?” she’ll say when a vaguely desperate (typically male) diner rings looking for a last-minute table on a certain night in the middle of February. But it never is.

“You don’t want to knock it,” Murphy says, balancing her personal feelings about “the most heteronormative night of the year” with her professional ones. She runs The Woollen Mills, The Washerwoman, The Legal Eagle and Grand Social and – like lots of restaurateurs – embraces a full night of bookings after a long quiet January.

Murphy has noticed several Tinder Valentine’s dates (yes really) in their pizza place, The Yarn. The room at the back of The Woollen Mills is popular with users of the dating app. “It’s dark and intimate and it’s fast and casual, so you can get out quickly, and it’s not too bright.”

St Valentine’s tends to bring out the younger novice diner who likes the idea of a set menu, Murphy says. The practice of a special loved-up (and priced up) Valentine’s menu can be a “slightly sharkish” restaurant practice, she says. But it suits the first-time diner who wants to know the bill before they sit down. As those twentysomethings get more comfortable in restaurants, the practice dies out.

Turning tables on St Valentine’s night, where you have a first and second sitting, is all down to numbers, she explains. The typical arrangement of tables for two, fours and sixes all become wall to wall “two-tops”, as bigger tables are split or that table for four becomes a table for two.

Often it’s people who don’t go out regularly will go out on Valentine’s Night. You get couples who barely speak to each other

Most restaurants make up for fewer numbers with two sittings. For front-of-house staff “it’s a demanding service. They tend not to be your regular customer so they don’t necessarily know what we do,” Murphy explains.

Chef Domini Kemp has seen enough public displays of restaurant affection to mark the night in her mental calendar with a skull and cross bones rather than a heart. “It’s possibly the worst night of the year. Often it’s people who don’t go out regularly will go out on Valentine’s Night. You get couples who barely speak to each other.”

The front-of-house staff will often take “bets as to who will storm out first”. Most diners don’t tip on Valentine’s, Kemp says. “Either they’re just not used to going out or they’ve had to fork out for some sort of nonsense earlier. There’s probably been a lot of spend before they get to the restaurant.” So the tip jar remains emptier than normal.

And the “Valentine’s special” menu? “Nonsense. Trying to jam as many supposed aphrodisiacs like chocolate and oysters onto a menu. It’s utterly contrived. I wouldn’t be seen dead in a restaurant on Valentine’s Night,” Kemp says.

The restaurateur’s dream St Valentine’s is a “cold, wet, windy Monday. Everyone’s hurting after Christmas, so that’s the ideal,” she says. The regular curse is when Valentine’s falls on a Saturday night, and restaurants don’t get to spread the love euros to the quieter part of the week.

I have seen people storm out, not quite drink in the face and a slap but I’ve seen blokes left sitting there going, ‘oops’

She’s seen her share of dramas when she’s been front of house on V-Night. “I have seen people storm out, not quite drink in the face and a slap but I’ve seen blokes left sitting there going, ‘oops’.” The night is “too schmaltzy, there’s far too much expectation. Yes I do sound grumpy but there’s no love lost for Valentine’s in this house,” she says. “Keep me as far from the cocoa-dusted oysters as possible.”

Restaurateur Nisheeth Tak is regularly booked up for St Valentine’s night in his Indian restaurant Rasam in Glasthule.  “We used to do lots of things with rose petals and passion fruit but people didn’t want any extra fuss. They just want to be left alone to enjoy their favourite dishes.” One year they sold just five or six set menus out of 120 covers. “We do tend to sell better quality wine. Most people treat it as a splurge, a night to treat yourself and we’re usually very busy the next night.” It has been traditionally one of his busiest nights in the restaurant business “even during the recession” .

Is it a privilege to be a spectator on life’s events and celebrations? Tak says definitely. Kids he “held as babies” to allow their parents to eat with both hands are now young adults “coming to the restaurant themselves.”

At the Michelin-starred end of things chef Ross Lewis’s Chapter One is usually booked up for both sittings on Valentine’s night for their four course menu. He’s a Valentine’s fan. “It’s a really solid part of the restaurant calendar.”

In Chapter One on St Valentine’s “we always involve the food of love, oysters and scallops, and anything sharing is a big winner. So we put on dessert surprise for two, and you can almost give the pastry section the night off because everyone will order it.”

Their average diner age goes down on Valentine’s in Chapter One, he says with a big bump in the 28 to 35 age group. “We seem to be in the zone of getting serious, the ages when you might be asking the question.”

We had to knock on the door and when we went in he was on his knees, begging her. She had said no

His most memorable Valentine’s? An Italian diner made an elaborate plan to propose to his girlfriend over an eight-course “no dairy” seafood menu more than a decade ago. The engagement ring was in the oyster which was the first course and the man booked the private room, filling it with enough roses to stock a florist’s shop. “I had a bad feeling about this one,” Lewis says.

After the ring was served in the oyster “the door closed”. Twenty minutes, then half an hour passed and seven more courses were lined up. “We had to knock on the door and when we went in he was on his knees, begging her. She had said no.”

The couple ate the rest of the meal and then invited Lewis to join them for a drink. It has mercifully been the exception to the rule. “We’ve had probably hundreds of proposals. I don’t know how successfully the marriages went but they all said yes on the night.”

Chefs’ and restaurateurs’ most romantic meals

“Taillevent in Paris. It was a three-star and lost its third star and got much better. They serve a poulet de Brest, pot-roasted chicken dish with a truffle sauce, and they carve it at the table. And it’s that wonderful French table service where you feel so spoiled and think ‘you guys just do it so well’.” Chef, Domini Kemp

Dinner in La Tupina, an “old Gascon restaurant in Bordeaux, ” where they serve “wonderful chicken with beautiful aromatic stuffing and chips cooked in goose fat. It’s a place where you feel good about yourself, with someone you feel good about.” Chef Ross Lewis

Pancakes and bacon in a diner in New York on the morning of my secret wedding, which would take place later that day in a decrepit city hall under a frayed American flag officiated by a very grumpy and tired New York city official. (We had grabbed two random witnesses and asked to take a photo to which she replied that we had no time as she had to pick up her kids.) The breakfast was lovely, romantic in its own way with lovely staff who were excited for us and gave us some extra pancakes by way of congratulations. Restaurateur Elaine Murphy

Lunch in the Eiffel Tower. I was 21, didn’t have much French and I ordered all the wrong food and wine. The waiter was not impressed with me. But it still sticks as a moment in time sitting in the tower overlooking Paris. That night and the dinner I had with Dani the night before we got married. Kevin Byrne, Mayfield, Terenure, Dublin 6