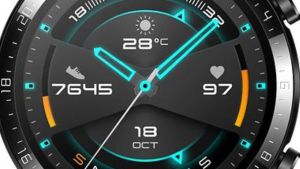 The Huawei Watch GT 2: the glass is now 3D, which means a slightly different look to the watch face.

It seems everyone is doing their own smartwatches, from fitness-focused devices from Garmin and Fitbit to manufacturer-specific devices from Samsung and Huawei.

The latter has brought out the second version of its Watch GT, named – obviously – the Huawei Watch GT 2, which is priced at €240.

So what is the difference between the first generation of this watch and the second? The differences may not be immediately apparent, but they are there and, in some cases at least, they are significant.

Lookswise, you’ve got more or less the same watch, but the glass is now 3D. That means a slightly different look to the watch face, although you don’t really get any bump in functionality. It’s a pretty extra that makes the GT 2 look bezel-less.

Apart from the glass, the watch is largely the same size as its predecessor, although it is lighter, which is welcome. We got the 46mm version of the Huawei Watch GT 2 to review, which is a little chunkier than I’d usually go for. There is, however, a 42mm version of the watch should you feel the same – you will sacrifice a couple of features though, such as bluetooth calling.

That is one thing that Huawei has changed. The first version of the watch would let you know when calls were coming in on your phone, but you couldn’t answer them on the watch as there was no microphone. It’s not an essential feature for me, but clearly someone felt strongly enough about it that Huawei saw fit to include it in the second gen of the product. You now have a mic and speaker built in, so you don’t have to touch your phone to keep in touch.

You still get GPS built in, plus a heart rate monitor, and Huawei has improved its fitness tracking with smart sports modes. When it comes to activity tracking, you can’t really argue with Huawei’s work here.

The battery life was one of the key benefits of the original GT, and luckily Huawei hasn’t backpedaled on this one. The new version uses Huawei’s own Kirin A1 chip, which may not mean much to the average smartwatch wearer, but they will feel the benefit in better power management.

One thing that hasn’t changed is the question of how many apps you use on your smartwatch. Huawei is betting the answer is not that many. How else do you explain the lack of third-party apps for the the Huawei Watch GT 2? The second generation of the company’s smartwatch is sticking resolutely to its guns on this one. There are no third-party apps, so what Huawei provides is all you will get.

On one hand, it’s not a big deal. Huawei covers all the basics, with plenty of health activities in the built-in apps to satisfy most people. However, when you have become used to syncing your fitness data with third-party apps such as Runkeeper or Strava, being unable to do that easily from the watch is frustrating.

NFC, almost a staple of smartwatches now, is also absent – unless you are in China. That means no contactless payments, although unless Huawei allowed a G Pay app on the watch, it wouldn’t be much good to you anyway.

Battery life is still excellent, if not quite the two weeks trumpeted on Huawei’s site. It means you can quite easily leave your charger at home and go away for a week, confident that the watch will last the duration. In a world where disappointing battery life is almost ubiquitous, Huawei manages to buck the trend.

Still no third-party support, or wireless charging for that matter. Lose that little pad (happened a couple of times already to me, albeit temporarily) and you are stuck without a charger. That’s where that almost two-week battery life will come in handy though.

The dependence on the phone – there’s no wifi connection – is also a little limiting.

If you fancy talking to your wrist, the GT 2 includes the ability to take phone calls on your watch. This is only for the 46mm version though.

Huawei makes some welcome changes to the Watch GT 2, but there are still some tweaks needed.