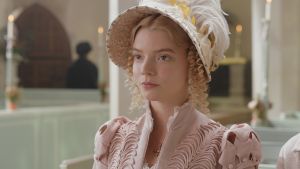 What is that full stop doing there in the title? It seems the latest adaptation of Jane Austen’s fourth novel really does take a period in its title. It’s “Emma.,” not “Emma . . .” or “Emma?”. Be grateful we were spared “Emma!”.

Autumn de Wilde’s picture doesn’t follow through on that implication of a final definitive take. There are some good ideas here. The overpowering prettiness is welcome in the windy months. But the characters are somewhat lost in a busy rush to find some new angle (any new angle) on a much-adapted text.

The most conventional aspect of the movie is, perhaps surprisingly, Eleanor Catton’s screenplay. The Booker-winning author of The Luminaries – a vast, intricate pastiche that revelled in literary self-consciousness – has delivered a script that would work perfectly well on Sunday-evening telly.

You know how it goes. Emma Woodhouse (Anya Taylor-Joy), famously “handsome, clever, and rich” sets to arranging other people’s affairs while putting her own on what Ms Austen wouldn’t call the long finger. Among the characters she encounters in this crisp version of AustenLand are George Knightley (Johnny Flynn), gentleman farmer with an Australian cricketer’s head, Mr Elton (Josh O’Connor), dull clergyman with the Prince of Wales’s ears, and her eager, easily damaged protégé Harriet Smith (Mia Goth).

If you need to know anything about her father, Mr Wodehouse, be aware only that he is played by Bill Nighy.

Autumn de Wilde, an experienced music photographer, has composed the picture in fastidious, ruthlessly neat images – you can smell the fresh paint off every set – that owe too much to the work of Wes Anderson. The intertitles are in Anderson Pink. The compositions favour his taste for posed formality. There is, however, no denying the resulting lusciousness. Making no nods to naturalism, Emma. argues relentlessly for the virtues of aggressive art design.

The outlying performances are excellent. Fresh from Upstart Crow, Gemma Whelan has the right class of open-faced ingenuity for Mrs Weston. Even those wary of Miranda Hart’s TV work will surely enjoy the combination of scattiness and vulnerability she brings to the ultimately misused Miss Bates.

The leads, though strong in their ways, fare less well with too-cool direction that never allows the personalities to develop. The version of Emma in Emma. (that thing is starting to annoy me) has not a smidgen of the vim that Alicia Silverstone displayed in Amy Heckerling’s great Clueless, a loose adaptation of the same text. The circling men are not clearly enough defined. There is insufficient punch to the ending.

A nice enough diversion, but the full stop does not come close to ending the conversation.