Coffee & Kareem: If you think swearing is big and clever, this is for you 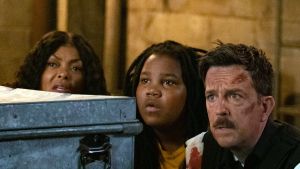 “I feel like you’re going to say something pussy-related,” Ed Helms’s beleaguered cop tells his reluctant teenage charge not far into this proudly profane new comedy.

Well, yes, that would be in keeping with the rest of the script. If you think swearing is big and clever, then Coffee & Kareem, which privileges “talking sh*t” above all other forms of human endeavour, is the movie for you.

Potty-mouthed 12-year-old Kareem (Terrence Little Gardenhigh) is dismayed to discover that his mom (Taraji P Henson) is in a sexual relationship with James Coffee (Helms). For one thing, the prepubescent feels slighted that another man is “hitting that” in “my house” without his consultation. For another, his mother’s suitor is a white cop.

How white? He sits in his patrol car listening to music and saying to himself: “Oh man, I would do anything to meet John Oates.” Worried that Coffee could harm his rapping aspirations, Kareem approaches some hoodlums in the hope of ridding himself of his potential stepdad. Unhappily, that meeting ends with him witnessing a murder, leaving the mismatched couple of the title on the lam.

What follows is a comedy that is as broad as it is crass. It is, however, mediated by no concessions toward good taste whatsoever and solid comic turns from Helms and newcomer Gardenhigh, who has enough star wattage at 12 to power the national grid. Betty Gilpin, who was so impressive in The Hunt, gets the lioness’s share of one-liners and has an absolute ball as Helms’s bullying super-cop superior. (“This is a man who jerks off to Glenn Close,” she sneers.) Henson is criminally underused but she does get to wreck a motel room in no little style.