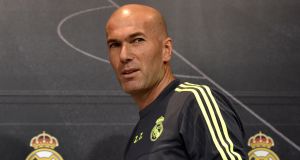 You’d have to have a heart of stone not to feel sympathy for Rafa Benítez this week: as if receiving the most unceremoniously crude axe imaginable from Real Madrid after half a season wasn’t bad enough, he quickly discovered that his replacement was none other than the coolest man on the planet (except, of course, on those azure afternoons in MacHale Park when Enda ditches the tie and goes with the Ray Bans).

Just like that, Zinedine Zidane is back: back as manager one of the wealthiest and definitely the most schizophrenic football club in the planet; Zizou, back to the Bernabéu where he remains a god and back under the burning spotlights of the world game, the same game he walked from defiant and remorseless having felled Marco Materazzi with that head butt in the World Cup final of 2006, his last, unforgettable act as one of the best footballers ever to play the game. If that exit as a player was jaw-dropping, then this entrance as a manager could not have been more spectacular.

But then, Zidane has form when it comes to unexpected turns. Although he was reticent in his pronouncements as his star ascended in tandem with the great French national team of 1998-2000, he nonetheless found himself accepting the invitation by Douglas Gordon and Philippe Parreno to star in their documentary film about, well, himself. Zidane: A 21st Century Portrait was both an ingenious and highly risky idea. Pick a random match featuring Madrid in La Liga. (It turned out to be against Villareal in the Bernabéu).

Train 17 film cameras on Zidane for the duration of the match. Edit the results and set the film to a washed-out, stoned guitar score by Mogwai and see what happens. It all sounded preposterously European and art-house and, on one level, it was and is.

The film works like a dream, though, because of its subject. It is not an idea that would work with anyone. There are many of us, for instance, who will always genuflect at the altar of Kenny Dalglish without ever wishing to study the King in close-up for a full 90 minutes.

Brian Clough’s memorable appraisal – “He wasn’t that big but he had a huge arse. It came down below his knees and that’s where he got his strength from” – summed up the fact that Dalglish’s ability with the football was all the more surprising and delightful because it seemed to defy his physical ordinariness.

Zidane is a cat of a different breed and had, by the end of his career, provided such a mesmeric highlight reel of football-as-art form that a film was always going to have merit. Still, it was a stretch to think that a man who had so steadily deflected praise and attention would agree to a project that on the surface might have been self-indulgent. But he was intrigued by the idea of showing people what it is like to be in the heart of a big football match; what it looked and sounded and, insofar as possible, felt like.

The necessary mistake that sports broadcasts and media and fans alike all make is that we follow the ball. But ask any manager or player: for most of the match, the ball has damn all to do with it. Zidane is one of the great films about sport because it captures, in unbroken time, how concentrated and frequently aimless and, in a strange way, lonely, it can be to play with one of the biggest football teams in the world in front of 80,000 people. In the interview he did to accompany the DVD of the film, he was clearly taken with the achievement of the film.

“In a way I felt like I was looking at my brother because we have the same look on our eyes, tough and dark. But at the same time, I recognised myself. Because it was me.”

Quite. He did nothing but play his game: the making of the film probably caused a bigger disturbance in the mind of David Beckham, who had to play in the same match combating the fact that there were 17 extra film cameras in the stadium and nary a one was bothered with him.

It was a perfect, last tribute to the Frenchman’s years in the game had he done what many of us expected and even hoped he would do after that ’06 final: disappear, remain above the fray, say nothing and leave the legacy as it was.

But one of the cruelties of elite sport is that it leaves even its genius practitioners behind before they are even through their 30s. Athletes are by nature driven and restless: how to find new challenges?

So now Zidane finds himself at the high table of football management despite his almost blank curriculum vitae: a few seasons on the coaching card of Real’s B team. This has been the season when the big clubs have begun to play roulette with their managers. The sacking of Benítez was just the latest example. In the decades when Manchester United had Alex Ferguson, Real Madrid hired and fired over 20 different managers. Benítez knew the form guide when he went there: managers get a season, if that, to prove what they are worth.

Will it be any different for Zidane? Madrid haven’t appointed a ‘manager’ in any conventional sense. There has been no time-honoured clawing through the tiers from the lower divisions, no track record, no identifiable approach to the game yet. Instead, the club directors have placed their faith and the fate of the club in their memory of the Zidane who exists in that film.

They are banking that he can somehow superimpose his brilliance and authority – and the undercurrent of anger which always informed his game – on a collection of misfiring superstars and on a club dazzled by a period of serene triumph for Barcelona.

It is the ultimate proof that the decision- makers in football have surrendered themselves to the idea of the manager as cult figure; as shaman. Will it work? It is hard to imagine that any figure in world sport will come in for as much attention or analysis as Zinedine Zidane will over the coming six months.

“Why did I say yes?” he said of participating in the film.

“I agreed because I didn’t have to play a role. Here, I just had to be myself.”