What’s on, where to watch, where to go – your guide to the weekend’s sport

Will Chelsea be crowned champions? There’s the Players, Champions Cup final and more 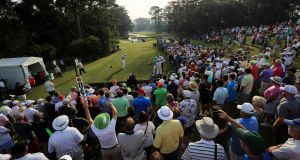 Henrik Stenson of Sweden plays his shot from the 10th tee during the first round of the the Players Championship at TPC Sawgrass in Ponte Vedra Beach, Florida. Photo: Mike Ehrmann/Getty Images

The Premier League title could be decided as early as Friday, Cork City look to make it a lucky 13, the best field in golf assembles for the Players at Sawgrass, there’s the Challenge Cup and Champions Cup finals, Ireland take on Bangladesh and New Zealand in ODI cricket, the Formula One season reaches Europe, the Giro d’Italia continues and there are four Irish race meetings.

Formula One: The F1 season reaches Europe for the first time with practice for the Spanish Grand Prix (Sky Sports F1, 8.45am). Sebastian Vettel will be hoping to make it a third win of the season, while Lewis Hamilton can overtake the German with a win.

Cricket: After defeats to England last weekend Ireland wioll be hoping to rebound in the first of their ODI tri-series matches against Bangladesh in malahide (eirSport 1, 10.30am).

Cycling: The seventh stage of the Giro d’Italia takes the riders from Castrovillari to Alberobello, around the heel of Italy (Eurosport, midday). Ireland’s Sam Bennett has had a good race so far and is right in contention.

Racing: There is one Irish meeting on Friday night if you fancy heading out to kick off the weekend. It’s a seven race card at Tipperary with the first off at 5.10pm.

Golf: It’s the ‘fifth major’, the best field in golf or whatever else you want to call it but the Players is the Players and is a top quality golf tournament (Sky Sports 4, 6pm). Rory McIlroy returns to action at Sawgrass after his recent marriage while Shane Lowry and Graeme McDowell also tee it up.

Rugby: It’s European finals weekend in rugby and it all kicks off with the Challenge Cup decider between Gloucester and Stade Francais at Murrayfield (Sky Sports 2, BT Sport 2, 7.30pm).

Football: The Premier League title race could come to an end on Friday evemning with Chelsea knowing that a win over West Brom at the Hawthorns will see them crowned champions (Sky Sports 1, 7pm).

There is also a second Premier League clash on Friday evening with Everton welcoming Watford to Goodison Park. Kick off in that one is at 8pm.

In the Airtricity League the Dublin derby of Bohemians and Shamrock Rovers takes centre stage in Dalymount Park with kick off at 7.45pm.

At the same time Cork look to make it a 13th consecutive win when they face Galway, Dundalk welcome Sligo and St Pat’s meet Drogheda. At 8pm Finn Harps take on Bray.

Football: Saturday’s sport kicks off with the early Premier League clash between Manchester City and Leicester as Pep Guardiola’s side look to cement a top four finish (Sky Sports 1, 11.30am).

At 3pm there are three Premier League ties – none of which, it must be said really look like getting the juices flowing. Bournemouth take on Burnley, already relegated Middlesbrough meet Southampton and already relegated Sunderland welcome a Swansea side who could really do with a win.

But we’ve now reached that oh so entertaining stage of the season that is the playoffs. Fulham meet Reading in the first leg of their semi final with both sides looking to secure a route back to the Premier League (Sky Sports 2, 5.15pm).

At the same time Arsenal travel to face Stoke, looking to build on their win against Southampton on Wednesday (Sky Sports 1, 5.15pm).

You can catch up on all of the day’s Premier League action on Match of the Day at 10.10pm on BBC1.

Finally, at 6.30pm Limerick and Derry round off the weekend’s Airtricity League action.

Cycling: In the eighth stage of the Giro d’Italia the riders travel from Molfetta to Peschici in what will likely be searing heat down the south of Italy (Eurosport, 12pm).

Formula One: After practice on Friday the drivers go through qualifying on Saturday in Spain to determine the grid positions for the big race on Saturday (Sky Sports F1, 12pm).

Racing: There is just the one Irish meeting on Saturday and it’s the first of two days of action at the Curragh with the opening race at 2.10pm.

Rugby: After the exits of both Munster and Leinster in the Champions Cup semi-finals, Clermont Auvergne and Saracens are left to battle it out for the Champions Cup at Murrayfield (Sky Sports 3, BT Sport 2, 4pm). If you can’t see them game live you can tune into highlights on TG4 at 9.15pm.

Golf: Moving day at the Players should see plenty of excitement on a newly reveloped Sawgrass course where the back nine offer plenty of opportunites for birdies . . . but also plenty of chances to blow a lead (Sky Sports 4, 7pm).

It’s a triple header of action on Sky Sports 1 and, following the clash of Palace v Hull is the meeting of West Ham and Liverpool (kick off 2.15pm).

Finally, rounding off the Premier League action for the day is the meeting of Tottenham and Manchester United (kick off 4pm).

You can watch all of the day’s Premier League action, as well as the goals from Saturday, on Match of the Day 2 at 10.30pm on BBC1.

Cycling: The Giro d’Italia continues with the ninth stage taking the riders from Montenero di Basccia to Blockhaus (Eurosport, 12pm).

Formula One: It’s race day in Spain with the first European grand prix of the year (Sky Sports F1, 12pm).

Cricket: Ireland take on New Zealand in the second of their Tri-Nations matches at Malahide hoping to recover some of the confidence of which the squad is quite low on at the moment (eirSport 2, 1pm).

Racing: It’s the second day of action at the Curragh with the first race off at 1.55pm while there is also action at Killarney, beginning at 2.05pm.

Golf: The world’s best will be competing for the famed Players crystal on Sunday with Sky Sports going all out on the coverage meaning you can’t possibly miss a single short (Sky Sports 4, 1.30pm).

Former Barcelona president Bartomeu arrested after club offices raided 12:41
Echoes of Berlin 1936 . . . Should Beijing Winter Olympics be boycotted? 10:01
The Offload: Ireland women must be allowed to move with the times 10:00
Tiger Woods touched by red and black tribute by fellow players 08:52
England prop receives death threats for not clapping Wales off the pitch 08:29