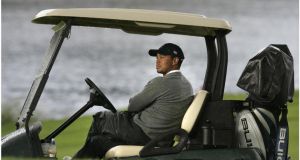 It was unmistakably John Daly. The billowing orange top, the garish patterned trousers and the redneck haircut. The first two days before the bad weather struck at Lake Michigan and golf was showing some of its fringe material.

The beefy former major winner took a few steps forward and launched the offending iron off the cliff and into the crystal clear lake. He then three-putted for a card-smashing 10.

But out on the bay a keen eyed skinny kid on a boat saw opportunity. He floated over to the splash, reached down and pulled out Daly’s club.

Standing on the prow of the boat bare-chested, he held the trophy above his head and drew a howling chorus of approval from the gallery.

“I shouldn’t think for one minute he wants it back,” noted Sky Sport commentator Ewan Murray.

Silence and the camera shot of a courtesy car pulling away from the clubhouse greeted the other casualty at Whistling Straits. The cameras followed Tiger on his final round and on Saturday he was out again to finish the remaining five holes at 7am. Crowds thronged the course early to see a fallen idol.

Each shot has its own attendant horror. Mishitting his ball six feet from one bunker and into another midway through his drawn final 18 holes seemed to visibly shrink a cringing gallery.

Shots he was holing out five years ago from on the green, off the green, in the sand are challenging his career and on Sky we get to see it all.

Woods is Usain Bolt unable to break 11 seconds over 100 metres. Television adores struggle even when, or, especially when, there is no Hollywood ending in sight. Woods left his third successive major below the cut line for the first time in his career.

But we also understand, and television more so, that real life drama unfolding is more watchable than hitting . . . yawn . . the greens . . . yawn . . . in regulation.

RTE took up the rugby challenge on Saturday. Shorn of Ireland’s pre-world cup game against Scotland, they scheduled three hours of European boxing. The likes of Shane Horgan, Paul Wallace and Alan Quinlan on Sky faced off with Bernard Dunne, Michael Carruth and Mick Dowling.

For the two fighters in Bulgaria you had just wished boxing had a fraction of the slick promotional machine of rugby, although, even if that was the case be certain if RTE, not Sky, had the rugby, boxing would have been banished to a delayed highlights event.

We would never have seen two of the best in the world, 21-year-old Ward winning his second European title and Conlan repeating his Commonwealth Games win against Quais Ashfaq, before knowing the outcome.

But even with the consistently stunning quality of Conlan and Ward and their regular place on podiums, obscenities, club-throwing and imploding superstars – who can beat that?