Roscommon prove they belong, United dodge FA Cup bullet as Arsenal crash out and what to watch out for 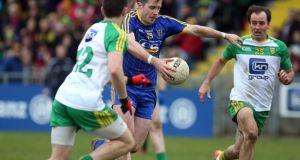 Roscommon underlined their status as a young Division One team more than capable of mixing it with the elite, after a fourth league win in a row on Sunday.

A Cathal Cregg second half goal secured a five point away win over Donegal, with the county’s energetic attack mustering another lofty tally of 1-19 to turn their focus from league survival to the battle for a semi-final berth. Meanwhile Cork’s early start blew Monaghan away, while a more efficient Kerry team edged out Mayo in Castlebar - leaving the Connacht champions looking over their shoulder with two games to go.

In yesterday’s top flight hurling a last second John O’Dwyer equaliser rescued a point for Tipperary against a Galway side inspired by the utter brilliance of Joe Canning. While in Walsh Park Dublin ended Waterford’s 11 game unbeaten streak with a gritty 0-19 to 0-14 win that secures a quarter final place for the capital.

Anthony Martial struck a late controversial goal to force a replay for Manchester United in their FA Cup quarter-final with West Ham yesterday - after a Dimitri Payet free kick had put the visitors ahead. While holders Arsenal were dumped out of the competition by Watford in a 2-1 defeat that will surely shred confidence further ahead of the midweek clash with Barcelona.

Scotland pulled off a major scalp at last by beating the French 29-18 at Murrayfield - a result that gives England their first Six Nations championship since 2011.

“It’s been a bit depressing, to be honest. At the same time, I don’t think anything has changed in terms of how much I question what we do and reflect on what we do.”

Charl Schwartzel secured his first victory in the United States since the 2011 Masters by beating Bill Haas in a playoff at the Valspar Championship in Florida late last night. World number one Jordan Spieth carded a 73 on Sunday to tie for 18th on even par. He was outplayed by 22-year-old amateur Lee McCoy, who shot 69 to finish fourth.

Rafael Benitez will kick start his reign as Newcastle boss tonight, away to league leaders Leicester City. Not the ideal start for the Spaniard.

There are six games tonight in the Airtricity League to keep an eye out for, includings St Pat’s taking on Bohemians.

1 On healing and wild hurling: The re-education of Diarmuid Lyng
2 Few, if any, have given as much to Munster as Garrett Fitzgerald
3 ‘Your father works for my father’: Schools rugby turning toxic in the stands
4 Wexford best the weather and Kilkenny on a mad day to be hurling
5 Jimmy Greaves: A working-class hero who defined a generation
Real news has value SUBSCRIBE