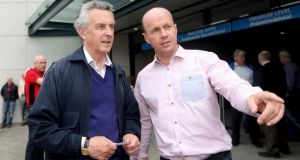 The all-powerful Coolmore operation has paid out a €22,500 supplementary fee in order to test Aidan O’Brien’s belief that Tapestry can follow in some illustrious family footsteps and secure Group One honours in this Sunday’s Moyglare Stud Stakes.

It is eight years since Rumplestiltskin landed Ireland’s premier contest for juvenile fillies. But her daughter Tapestry was added to a list of 13 entries set to line out for the €225,000 highlight at yesterday’s forfeit stage.

Like her dam, Tapestry scored in the Friarstown Stud Group Two Debutante Stakes over the Curragh course and distance on her previous start. And she is one of five O’Brien trained fillies as the champion trainer pursues a seventh Moyglare success.

Also among the Ballydoyle list of possibles is the Silver Flash winner Wonderfully and Perhaps who chased both her home at Leopardstown, and also Tapestry in the Debutante.

A decade of home success in the Moyglare ended last year. The subsequent Guineas heroine Sky Lantern won out and the two cross-channel hopes this time are the current favourite for next year’s 1,000 Guineas, Kiyoshi, and veteran trainer Clive Brittain’s Queen Mary heroine Rizeena.

The latter chased home the top American colt No Nay Never in the Prix Morny at Deauville recently, but Kiyoshi will be having her first start since impressively scoring in the Albany at Royal Ascot in June.

Suitable trip
“We are very happy with her and looking forward to running over seven furlongs. It’s a galloping track and should suit her,” said Kiyoshi’s trainer Charlie Hills yesterday.

Initial bookmaker reaction yesterday was to make Kiyoshi a 13 to 8 favourite for Sunday, with Paddy Power going 3 to 1 about Tapestry in a renewal where the sponsors chances of a first ever win in their own race, in the thirtieth year of it carrying Group One status, looks to be Carla Bianca.

Dermot Weld has already warned that he doesn’t want a lot of rain to fall on headquarters this week where ground conditions yesterday were described as “good.” Carla Bianca was runner-up to Australia on her debut while Moyglare also have kept open the option of running another maiden, Afternoon Sunlight.

Jim Bolger is a triple-Moyglare winner and the most intriguing of his three entries this time looks to be the unraced Prudent Approach, a full sister to the 2,000 Guineas winner, Dawn Approach. Bolger isn’t afraid to pitch newcomers in at the deep end and famously landed the hugely-lucrative Goffs Fillies Million on her first start in 2007.

Trainer Frank Dunne has paid €6,000 to supplement One Spirit into the Group Three Dance Design Stakes on Sunday.

Ballydoyle juvenile
There could also be huge interest in the Group Three Round Tower Stakes if the highly rated Ballydoyle juvenile Great White Eagle makes his second start there. A winning Naas debut propelled the colt towards the top of antepost betting for next year’s Guineas.

Final confirmation has been announced that Attheraces (ATR) channel, along with partner SIS, will retain the media rights to Irish racing until the end of 2016 after a deal was agreed with the Association of Irish Racecourses (AIR) and Horse Racing Ireland (HRI).

Under the terms of the new agreement, ATR will have exclusive cross-platform media rights worldwide to all Irish fixtures. SIS retains all domestic and international betting shop rights. As part of the new deal, ATR has offered AIR/HRI a seat on its board.

1 Serpentine stays on from the front to steal Epsom Derby for Aidan O’Brien
2 Eamon O’Shea: We spent quite a bit of time talking about older people rather than to them
3 Love tears them apart in stunning Epsom Oaks romp
4 Monica Seles: The warrior queen who could have been the best ever
5 Arsenal check Wolves to relight their European fire
Real news has value SUBSCRIBE
Here is your handy guide to sport on television this week