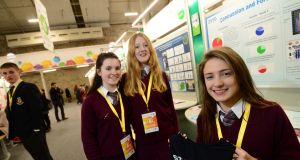 Many important discoveries result from an unlikely knocking together of heads, although not the way Julianne Grehan and Caoimhe Browne experienced it. What they’ve discovered may also have a fresh impact on our understanding of one of sport’s most complex subjects.

Because together with classmate Clodagh Jones, they’ve put together a timely study on the impact of concussion in sports such as rugby and Gaelic football, specifically among students aged 11-18. Only their project – immediately conspicuous amongst the BT Young Scientist and Technology Exhibition – was not inspired by genuine concern.

About a year and a half ago, when playing an under-16 county final with their club, Adare GAA, Julianne and Caoimhe literally knocked heads together, although fortunately not in a serious way. However, Julianne had experienced a similar head-impact injury a few weeks before, and 10 minutes after clashing heads with Caoimhe was still feeling a little dazed.

“At the time we were actually thinking of a project for the school SciFest,” says Julianne. “After we knocked heads I was a little concerned about head impact injuries, and wasn’t very aware of what it all meant . . . That’s when we came up with the idea of looking into concussion.”

As part of their research they came across scientific literature which indicates that the brains of young girls often develop differently to young boys, not only making them more susceptible to head injuries but also requiring a different recovery process.

“One of the things we discovered is that many young players don’t know what to do if they sustain a head injury, and whether or not that might be a concussion,” says Clodagh.

As part of their project – entitled Concussion in Students: Is the Force of Impact a key factor? – they also examined how different playing positions are more or less prone to head injuries, based on g-force measurements. In Gaelic football, defenders are more prone, forwards less, with midfielders the least.

In their survey of 181 students (aged 11-18) they also found that 63 reported having sustained between one and three head injuries.

Forty two of those reported they wouldn’t feel confident about telling their coach or tea-mate about a potential concussion. Indeed Julianne admits there is that kind of “macho” mentality even among schoolgirls.

Education and information remains central to the subject, although Caoimhe also highlighted the value of a “spotter” as used in some US sports, an unbiased member of crowd designated to identify potential head injuries.

Queensly Erhabor, Erin Murphy and Muirne Clarke from St Mary’s Secondary School in Mallow discovered there is still a significant gender inequality in the media coverage of women’s sport, and also looked at ways of changing people’s attitudes. Part of the problem is that women are more likely to drop out of sport after the age of 19, either through lack of interest or through available time. “We also found the female sports clubs are not being as well funded,” says Erin.

One schoolboy sporting project deserves special mention. Matthew Stenson from Ardscoil Rís in Limerick looked at ways of improving the traditional hurley, both in terms of design and material, particularly given concerns over ash supply. Beech-made hurls, he discovered, can actually send the sliotar nearly one metre further in puck-outs, while simple adaptations to the bas of the hurl, such as engraved lines similar to the golf club, can also result in improved distances.

1 A new breed of superstar - Collin Morikawa wins US PGA
2 Ken Early: PSG would be sensible final move for Ronaldo
3 My sporting disappointment: Jimmy White and the elusive World Championship
4 All in the Game: Bohemians forced into awkward apology
5 TV View: Verstappen full of beans as Red Bull wing their way to stunning success
Real news has value SUBSCRIBE
Here is your handy guide to sport on television this week