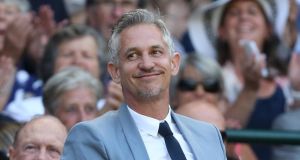 Ah, Steve Rider. Out of the haze of sports television’s glory years steps the most urbane and dulcet-toned presenter of them all to remind everybody of the era when BBC was the undisputed king of live coverage and subscription channels were just an evil half-thought scribbled into some 1980s diary by Rupert Murdoch.

Rider’s heyday as the leading light of sports anchors has passed but he was on hand to wrap the knuckles of the very man who succeeded him as Auntie’s favourite sports guy, the perpetually boyish and just-back-from-Maldives-on-Tuesday tanned Gary Lineker.

There was something fitting and touching about the recent indirect spat between the two over that most urgent of global topics: golf coverage. Lineker, secure in the knowledge the Beeb had lost out on its bid to retain six decades of British Open golf coverage to the dreaded and unstoppable Sky, lashed out against the elitism and snobbery which informs the attitude of the members of the Royal and Ancient, who ran the golf tournament. Lineker accused them of acting as though they are “superior beings” and of being “pompous”.

During his brief period as BBC’s face of golf, Gary Winston Lineker – son of Leicester and, indeed, of Margaret and greengrocer Barry and capped for queen and country some 80 times – became convinced the the good folk of the R&A didn’t much like the cut of his jib.

It was a view endorsed by Roger Mosey, former head of the Beeb, who noted in his memoir that “A dinner with the R&A never passed without sniping at Gary”. Mosey did not spill the beans on the exact nature of the sniping. Maybe the R&A didn’t like Lineker’s fondness for wearing the third button of his always-starched shirt open, a style that hovered between comfortable and suggestive.

Maybe they were battling with decades-old resentment that he had never quite done it for England in the big games. Or maybe they just never forgave him for replacing Des Lynam. It seems to go without saying that if you want to hang out in a club bearing the words Royal and Ancient, you’d want to have a healthy surfeit of both pomposity and superiority.

Something about Lineker’s criticism provoked a sharp return from Rider, who was moved to call his remarks “sour and misguided”. What’s more, he revealed Lineker had lost none of his old goal poacher’s instinct when he was an up-and-coming thing in the BBC: established as a football anchor, he apparently “volunteered” his services to present the US Masters at Augusta after Rider left the broadcaster following irreconcilable contract differences.

The latter’s verdict on how Lineker performed as a golf anchor was damning. “For four years, the R&A and most other observers knew that Gary was the wrong man for the job. Golf presentation,” he declared, “especially at Augusta, is seat of the pants, unpredictable and demanding.”

There is no doubt Rider was the BBC’s man for all seasons. He was wardrobe’s dream: wrap him in a chunky scarf and he looked right at home among the Land Rover set at Twickenham on a frosty Saturday in February. Have him front the Boat race and he sounded as if he had just missed out on a seat on the blues while reading English at Balliol.

When Rider pitched tent at Augusta, he looked like the quintessential Englishman in America. He might submit to a short-sleeved pastel shirt but that was as far as it went. He was clearly fond of his hosts but nonetheless baffled by the loudness and verve of the place, much like Lane Pryce in Mad Men.

At Augusta, Rider never failed to remind his audience he was “over there” and, even if he was a good sport about it, there was no place like Blighty. With Rider, of course, it was all about the voice. He was either born with or acquired one of those English voices that float above the classes, like the young Richard Attenborough of Brighton Rock or James Alexander Gordon, who made reading the Saturday afternoon football classifieds a symphonic experience in sound. The BBC specialised in polishing and honing these voices until they were more recognisable than the faces they belonged to.

It was different with Lineker. After finishing in football, Lineker wasn’t about to try to pretend he had spent the previous four decades chumming with Ken Branagh. The speed and ease with which Lineker adapted to the world of television was arguably as impressive as his football career. He looked like he was born to it.

The slightly flat Leicester intonation never deserted him, a fact he alluded to as recently as the World Cup last year. Before a France game, BBC broadcast all five minutes of Thierry Henry reciting Charles Baudelaire’s Élévation. It sounded all French and moody: it sounded great. “Try following that in my Leicester drone,” Lineker sighed.

The suspicion must be that that was at the heart of Rider’s gripe about Lineker. Gary just didn’t sound golf-y enough to fit in. At Augusta, Lineker was undeniably more casual than Rider: he couldn’t contain his glee at being there or with getting to interview a perspiring Colin Montgomerie rather than discussing the pros and cons of Emile Heskey. But there was nothing wrong with how he presented golf and Rider’s idea that any golf tournament is “seat of the pants” just doesn’t wash.

In a strange way, Rider’s complaint confirmed what Lineker accused the R&A set of in the first place. Maybe he is better suited to the vanilla badinage with Lawro and company on the sport for the masses. But something about the row between the Beebs’ golden boys past and present was a powerful reminder about how reduced the broadcaster has become as a force in sports.

Somewhere, the spectre of Lynam, slightly un-ironed but never unruffled and faintly sardonic, hovers over all of this. In Ireland, some people were slightly resentful Lynam didn’t make more of the fact he was born in Ennis. He possibly feared that any public embrace of Irishness would have landed him with the rebranding of “Dessie”, which would have killed his image stone dead.

Lynam soothed England through excruciating World Cup nights and Grand National days and everything in between and did so in a way that seemed effortless. From his, Messrs Rider and Lineker took their lead.

The reason that this week’s spat between his successors is relevant is that it concerns the Open, one of the jewels of BBC annual sports schedule for 60 years, which they will broadcast for the last time next year before it moves to Sky.

So Lineker and Rider’s squabble is all in vain. The R&A will soon be entertaining a new television face.