Sonia O’Sullivan: Intersex athletes and the problem of testosterone

With Olympics on horizon, the Court of Arbitration for Sport has thrown spanner in works 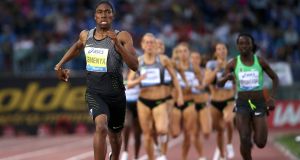 Alittle under two months to the Olympics and events have been heating up on the track and field. Luckily, they still show the Diamond League meetings on TV in Australia, and even if watching it on screen isn’t quite the same as being there, I’ve been staying as close to the action as possible.

I’ll also be home in a few weeks, doing some analysis for RTÉ’s coverage of the European Athletics Championships in Amsterdam in July, then again for the Olympics in August. As you’d expect in an Olympic year, there have already been some standout performances, and I’ve no doubt these are the athletes who will carry through their form to Rio.

For me, the women’s distance running events have always been the most intriguing, and what I understand the most, given that’s where I competed, although in preparing for my analysis work with RTÉ I’ve been fairly glued to all events, men and women, from the 100 metres to the pole vault.

Still, there’s no hiding from the fact the one event standing out from the rest this year is the women’s 800m. In almost all those races I’ve seen so far, particularly in the Diamond League, it’s been very hard to accept that it’s a level playing field. Not just because of Caster Semenya, from South Africa, although she is the athlete getting the most attention.

It’s through no fault of their own that these athletes have been born with more male genes and hormones than female; but this doesn’t mean they can simply be classified as women, and allowed to take part in women’s events.

Before the CAS decision, the IAAF required that intersex athletes, with hyperandrogenism, undergo artificial lowering of their testosterone levels, as this was the one marker that created the imbalance in performance.

Such athletes were required to have a testosterone level lower than 10 nanomoles per litre (nmol/L) of blood. Anything above this was considered unnaturally high for a woman, unless carried out through some method of doping.

So at that point it was at least agreed by the IAAF and the IOC that these athletes would be entitled to compete, provided they underwent the treatment, which meant there was a level playing field with the majority of women athletes.

That all changed again when the Indian sprinter Dutee Chand, an intersex athlete, won her case with CAS, against the IAAF and the IOC, on the basis she didn’t want to artificially change her hormone levels.

CAS also ruled that a high level of testosterone was not sufficient evidence of a performance benefit in women.

To me, that CAS decision seems ludicrous, especially as it forced the IAAF and the IOC to produce more evidence to support their original decision to limit the allowed testosterone levels in women: that’s the one marker that created the imbalance in performance, and which has long been known.

In many ways it seems the situation has gone backwards in the past 20 years.

I can recall one of my first senior appearances for Ireland where I had to take a chromosome test to prove I was in fact female, and thereby be allowed to compete in women’s events.

Later, at the 1996 Olympics in Atlanta, as soon as we arrived in the athletes’ village we had to go to the medical centre for a sex test.

I walked in, confident the simple cheek swab would be no problem, only to be asked for a visual as well. I thought for sure they were joking, but they weren’t. Then we were all given a gender card that had to be attached to our accreditation before being allowed to compete.

Now it seems this decision is being taken away from the sporting bodies and turned into a legal issue, thus allowing some athletes to take advantage of their genetic disposition.

To me, it should be a sporting decision; it should be about allowing women to compete against other women, with no one holding an obvious advantage over the rest of the field.

Instead, the issue has now reverted back, leaving athletes that were required to have lower testosterone levels free to compete until more proof is provided by the IAAF and IOC to determine that intersex or transgender athletes must meet certain guidelines, or compete in another category.

It actually feels like the majority of women athletes are being held to ransom, while the legal teams get their act together and make a decision on the future for women’s sport – while the athletes in question continue to compete, winning medals, setting records and walking away with a substantial amount of prize money.

Semenya is unbeaten in her three Diamond League races, in Doha, Rabat, and Rome, running times far faster than her opponents and making it look easy.

At the very least it should be that any such athletes in question, who are allowed to compete, should not have their results ratified until this issue is resolved.

Also, any prize money should be held in trust until proof and evidence is delivered. And most of all, Olympic medals should not be distributed until all the evidence is on the table and everyone is categorically clear that female athletes are the athletes that are being rewarded.

The main focus may be on the women’s 800m, but there are likely other female athletes in other events and other sports that could be out-categorised by this situation, and it’s only fair and reasonable that a solution is found that is legally, emotionally and generally accepted and agreed by all sporting bodies and athletes.

The way things are going, and if more results are allowed to stand, records, medals, prize money and credibility in the sport for fans will be lost and never recouped.

Or, if the rule is potentially rewritten in favour of the IAAF and IOC, athletes that fail to make finals or win medals could be seeking compensation.

It seems crazy no decision will be made before Rio to ensure credible results, that won’t need to be annulled in years to come. And even still, the payback is never enough for athletes who are just being played like pawns on a chess board.

Right now, the status for women athletes is weighed more favourably to the minority. And the CAS ruling has not only raised more questions than answers, but allows uncategorised racing at the highest level in women’s athletics.

It was definitely one less thing I had to be concerned about when racing on the world stage, which seems to contradict the forward steps recently taken to eradicate drug cheats, and a return to a sport we can trust and believe in once more.