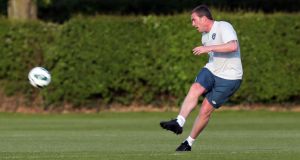 Richard Dunne during Republic of Ireland training at Colney in London on Sunday. Photograph: Donall Farmer/Inpho

Marc Wilson looks increasingly likely to miss Wednesday’s friendly game against England with a calf strain but his Stoke City team-mate Glenn Whelan trained with the rest of the squad at their base in St Albans today and now looks to be firmly in contention to start.

“Glenn Whelan is fit,” said Marco Tardelli afterwards, “but maybe Marc Wilson will not be ready. “We’ll look at him again tomorrow but really the most important thing is that he is fit for the game against the Faroe Islands, we need him for that game.”

Richard Dunne also took a full part in the end of session training game but Tardelli confirmed the impression given by Giovanni Trapattoni on Sunday that the match at Wembley would be considered too much too soon for the 33-year-old.

“For Richard, the England game is impossible,” he said, “but I watched him in training and he did well. Maybe it’s possible that he will play a few minutes against Georgia. It’s possible.

“If he is fit and he wants to play then we will be very happy but we have to keep an eye in him in training. The England game would be too much for a player who hasn’t played football in a year,

“This a very important match for everybody, I think it’s better if he waits for a game that might be a little easier. Of course I don’t know for sure it will be easier but I think it’s possible.

“This game is a very important game for the people,” he continued, “and we hope it’s a good match, one played in a good spirit. It’s important too for the supporters to clap both teams.”

Asked about the prospect of the four Hull City players in the squad (David Meyler, Stephen Quinn, Robbie Brady and Paul McShane) being involved in the Premier League next season Tardelli observed: “I’m very happy (to see the lads at Hull get promoted) but I hope that next year they play in the Premier League, that’s important. They need the experience of playing at that level so that they can bring that to international matches.”

1 Six Nations: Ireland are contenders but England still the team to beat
2 In Donegal Michael Murphy is seen, simply, as a godsend
3 Owen Doyle: Creeping professionalism of schools rugby a threat to the game
4 Mike Catt hopes to have Irish backs purring in Six Nations
5 Allianz Football League weekend previews
Real news has value SUBSCRIBE
Crossword Get access to over 6,000 interactive crosswords