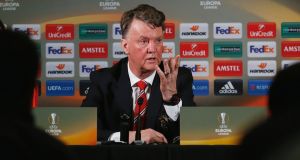 He will also be aware that a tie tonight against FC Midtjylland is not a natural setting to get the juices flowing and he admitted his team might be suffering because of all the scrutiny of his own position.

“I think maybe it can be an influence,” Van Gaal said, when asked if he suspected his team had been affected by all the speculation surrounding his job. “There is a lot of criticism so it can influence them, but they have to use their tools to ignore all the criticism because that’s very important – and not only the criticism of their manager but also about themselves.”

Ideally, the United manager said, his players would be strong enough mentally to use the swirl of negativity surrounding the club “as a means to prepare yourself properly” and ensuring “it should not be an influencing subject” unless it could be used as a form of motivation.

Yet his own analysis of United’s hopes, following on from the dismal 2-1 defeat in Denmark last Thursday, was not entirely in keeping with what might have been expected for a manager of this club – in particular to questions of whether his team should still ease past Midtjylland and, if not, were they risking full-on humiliation.

“Everyone thinks it [the challenge] is nothing but they have a lot of qualities. Everybody is thinking Manchester United have to win, because of the status of Manchester United, but you have to analyse the opposition.”

United’s opponents are breaking new ground making it into the last 32 of the Europa League, but Van Gaal said the Danish team’s inexperience might not count against them.

“You have to be open to it but no one knows better than myself how I played.”

This time Van Gaal wants his team to “keep the ball better and move the ball quicker” and his intention, he said, was to pick his strongest possible team, regardless of the game against Arsenal on Sunday.

With his job on the line, Van Gaal must know anything but a straightforward win will invite fierce criticism. However, his chances are undermined by the club’s injury issues and he confirmed he will still be without his goalkeeper, David de Gea. Marcos Rojo may be among the substitutes but Van Gaal said the game had come too early for Antonio Valencia and Adnan Januzaj. – (Guardian Service)