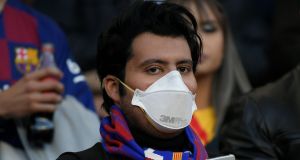 Barcelona v Napoli will take place without spectators due to fears over the spread of the coronavirus. Photograph: Getty Images

Barcelona have become the latest club to confirm their European tie will be played behind closed doors due to the coronavirus outbreak.

The Catalan club confirmed on Tuesday morning the Champions League last-16 second leg with Napoli — scheduled for Wednesday, March 18th at the Nou Camp — will take place without any fans in attendance.

Paris St Germain’s match with Borussia Dortmund on Wednesday is also being played behind closed doors, while Wolves’ Europa League tie at Olympiacos in Greece on Thursday will have no spectators inside the stadium.

Uefa confirmed that news on Monday in addition to revealing Roma’s home game with Sevilla in the Europa League on Thursday will be played without fans in attendance.

Manchester United’s Europa League match at LASK on Thursday could also be played in an empty stadium. Austrian health minister Rudolf Anschober reportedly said on Tuesday that all outdoor events in the country with more than 500 people would be cancelled until mid-April.

Uefa is understood to have been in contact with both clubs, as well as local and national authorities, ahead of the last-16 first leg in Linz, where local media has suggested the match will be played without supporters.

On Monday, all domestic sporting activity at all levels in Italy was suspended until April 3rd at the earliest, including all matches in Serie A. And now all La Liga matches will be played without fans for at least the next two rounds of fixtures to try and stop the spread of the coronavirus, the Spanish league has confirmed.

Meanwhile the FA of Bosnia and Herzegovina has postponed ticket sales for their Euro 2020 qualifying play-off semi-final with Northern Ireland on March 26th.

“In order to prevent the spread of the coronavirus, and in accordance with the recommendations of the relevant institutions, the ticket sale is postponed for several days,” the Bosnian FA said on its website. “A new ticket sale date will be announced later.”