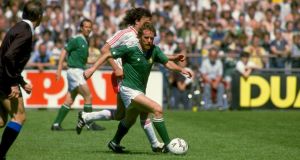 Leading FAI officials as well as former Ireland managers Eoin Hand and John Giles have paid tribute to Tony Grealish the former Leyton Orient, Brighton, West Brom and Republic of Ireland midfielder who died on Monday night at his home in Devon at the age of 56 following a battle with cancer.

Probably best remembered in England for his time with Brighton, the club he captained in the 1983 cup final due to Steve Foster’s suspension, the London- born player, who captained Ireland 17 times, became an immensely popular figure here due to his fierce commitment to the cause.

“Tony Grealish was one of my footballing heroes when I was a child,” said FAI chief executive John Delaney yesterday, “and I always remembered him as a great competitor who always gave his all for Ireland. He will be missed by Irish football and we will be paying tribute to him at the forthcoming international against Georgia.”

Giles handed Grealish the first of his 45 caps against Norway in 1976 and subsequently signed him for West Brom in 1984. “I obviously knew him at that stage from the Ireland set up and knew what to expect. He wasn’t the classiest of players but he was one of the most hard working and you knew exactly what you were going to get.

“He was well connected to Ireland (his father was from Galway and his mother’s parents from Limerick) and he was very committed to the team; he loved coming over and being involved. He was a great lad,” he added warmly; “a social animal who liked a drink after a game but gave you absolutely everything during it.”

Alan Kelly made him skipper of the team for the first time against Switzerland when he briefly took charge in 1980 and he was absolutely central to Hand’s side over the following five years.

“He was a great character,” said the former Ireland manager. “I don’t think I ever selected a team during my time in charge that didn’t have him in it.

“I think it’s fair to say he raised his game when he was playing international football. I’d say he was a great club player but the commitment he gave for Ireland; he just couldn’t have given that on a twice weekly basis playing club football. He gave absolutely everything.

“He contributed so much (including eight international goals), had an infectious enthusiasm for it all. If ever there was someone who showed how proud he could be to represent his country then Tony was it. He was very much part of it all; a great ambassador; very generous.

Grealish became the team’s regular captain through the 1984 European championships campaign. “Liam Brady and Frank Stapleton were my other captains,” recalled Hand, “but with them it was because they were great players; Tony was more in the Mick McCarthy mode: somebody who led by example, gave everything but who didn’t take any nonsense from anyone…if you weren’t pulling your weight, he’d let you know about it.

“I couldn’t speak highly enough of him really. He was a great example to other in the way he dealt with people; other players, supporters, kids….a really wonderful guy. I was very lucky to have him around when I was manager.”

Grealish’s last game with Ireland was Hand’s last, the 4-1 defeat by Denmark in November 1985, and he finished his playing days with non-league Bromsgrove Rovers in the early nineties. He had a spell managing there and at Atherstone United but drifted out of the game and had had a spell working and living in Spain before becoming ill around 18 months ago.

He is survived by his partner Wendy, children Garret and Jordana, grandchildren Harrison and Joshua, his mother Nora, brother Brian, sisters Anne and Christine and ex-wife Pippa.