Spain considering allowing fans to return to matches this month 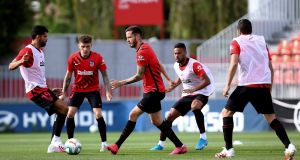 Spain’s health ministry is weighing up whether to let fans back into stadiums when the La Liga season restarts later in June after a three-month pause due to the new coronavirus pandemic.

Health emergency co-ordinator Fernando Simon explained that regions which had moved into phase three of the process could be authorised to hold matches with spectators but added that they might be prevented from doing so in the interest of sporting fairness.

The top-flight is starting up again on June 11th with the Segunda Division resuming a day later, and y La Liga has said all matches should be played without supporters in order to prevent a second wave of the coronavirus outbreak.

But second-tier Las Palmas have started a discussion about fans returning after their president Miguel Angel Ramirez said he hoped fans could attend their first match back against Girona.

He added that the players and the department for sport do not want supporters at matches until every club is allowed to have them back.

“The department for sport have agreed this with the players. That decision did not come from the health department as it’s not something we considered when evaluating the risks,” Simon said.

“We haven’t given any firm answer as we are obviously not in a position to do so yet but it is true that the health minister has committed to evaluating the risks. And if a region is in phase three [fans attending matches] will be evaluated.”

Spain, one of the countries in Europe worst-affected by the virus, imposed a strict lockdown in March but has been easing restrictions according to progress made in each region.

The majority of provinces are expected to move into phase three from June 8th, with the exception of the region of Madrid, the province of Barcelona and some provinces in Castille Leon.

La Liga president Javier Tebas has said the organisation is planning for supporters to return to stadiums in stages next season, which is due to begin on September 12th, as long as they get the green light from health authorities.