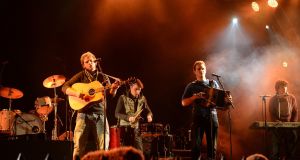 Seo Linn will be playing The Irish Roar live on the pitch in the Aviva Stadium on Friday, May 27th, before the Euros send off game versus the Netherlands. Photograph: Dara Mac Dónaill 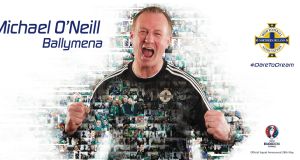 One of the billboards featuring the Northern Ireland football squad and manager Michael O’Neill which are to go up across the country ahead of the summer’s European Championship. Photograph: PA Wire

The Football Association of Ireland (FAI) has released a sneak preview of the Republic’s official Euro 2016 anthem.

Seo Linn, the Coláiste Lurgan band whose Irish translation of Avicii’s Wake Me Up has had millions of views on YouTube, hopes to raise passions through The Irish Roar.

A 30-second video clip of the song has been posted online and it will be performed for the first time on Friday at the Aviva Stadium.

In a post on Facebook, Seo Linn said: “We are delighted to announce that our song The Irish Roar has been chosen as the Official FAIreland Song for the Euros 2016.

“We will be playing it live on the pitch in the Aviva Stadium on Friday, May 27th, before the big send off game versus Holland.”

Seo Linn have come to prominence for their involvement in Irish language summer school Coláiste Lurgan’s YouTube videos, with which they have now garnered upwards of 18 million views.

They also took part in the much-acclaimed, televised 1916 Centenary show at the Bord Gáis Energy Theatre.

The Republic of Ireland opens its Euro 2016 campaign on Monday June 13th against Sweden.

Meanwhile, the Irish Football Association – Northern Ireland’s governing body – is gearing up for their participation in the tournament with a billboard promotion highlighting the squad’s local links.

Images of 30 players hoping to make the trip to France will be displayed in their home towns.

Star striker Kyle Lafferty’s poster will be installed in the Co Fermanagh village where it all began with NFC Kesh.

Representatives from every county have been selected for the extended squad and eye-catching posters will also be erected in Cookstown, Donaghmore, Dungannon and Belfast among others. Jim Shaw, Irish FA President, said:

“These billboards are a fantastic way of showcasing the players as the heroes that they are. Each one is a work of art in itself and they really demonstrate in a dynamic way that every part of Northern Ireland will be represented when the team runs onto the pitch in France.”

The Northern Ireland squad of 23 players for Euro 2016 will be announced by manager Michael O’Neill next Saturday, May 28th at noon.

Northern Ireland’s first fixture is in Nice against Poland on June 12th. The next is in Lyon against Ukraine on June 16th, and then in Paris against Germany on June 21st.

1 Sonia O’Sullivan: Taming The Tan gave us one last roll of the dice before shutdown
2 Avoid the treadmill at all costs – marathon training in the 2km radius
3 Premier League stress to PFA that players need to take pay cuts
4 America at Large: On Long Island, longing for a return to our field of dreams
5 ‘NRL Island’ being considered in Australia to continue season
Real news has value SUBSCRIBE
Crossword Get access to over 6,000 interactive crosswords