Champions enjoyed the lions share of possession in 2-0 victory 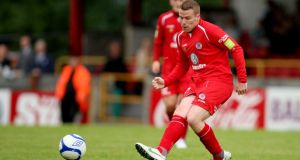 Sligo Rovers slim hopes of retaining their Airtricity Premier division title are still alive after Saturday nights 2-0 win over Limerick at the Showgrounds but Ian Baracloughs side can expect much sterner tests in the weeks ahead.

The fare served up by both sides was far from edge of the seat stuff for a crowd of 1,684 but in the end it was another crucial three points for Sligo.

Sligo manager Ian Baraclough said “putting everything together it was as a good a performance as we’ve had all season . We were not under threat, there were no panic moments and we are in good shape going into the last eight games of the season.”

Rovers hit the front after eight minutes of the first half when Raffaele Cretaro met Kieran Djilalis cross with the ball deflecting into the Limerick net off defender Patrick Nzuzi.

The champions enjoyed the lions share of possession in the second half with Djilali and North going close in the 74th and 77th minutes respectively.

1 ‘Manchester United are lucky to have you’: Klopp responds to Donegal schoolboy’s letter
2 England coach Eddie Jones apologises after making ‘half-Asian’ comment
3 Liam Toland: Larmour can distract England while others flourish
4 Cian Healy’s hunger for battle undiminished by the years
5 Sean McDermott plots route from Norway to Ireland’s No 1
Real news has value SUBSCRIBE
Crossword Get access to over 6,000 interactive crosswords