Rovers march on in Europa League 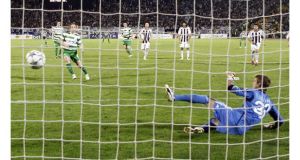 Partizan Belgrade 1 Shamrock Rovers 2(Rovers win 3-2 on aggregate): Shamrock Rovers will go into the hat for the group stage draw of the Europa League tomorrow morning, becoming the first Irish side to do so, after 120 minutes of unrelenting drama in Belgrade tonight.

Stephen O'Donnell’s penalty in extra time earned their passage but the night will be remembered not just for Pat Sullivan’s wonder goal, which cancelled out Partizan’s first-half opener, but as the night Rovers made history.

Having conceded a crucial away goal in Tallaght last week, things threatened to go awry in the early stages for Rovers when Ryan Thompson, who had a decidedly mixed night in goal, could only direct his kick-out to Jovancic but with a clear run on goal the striker miscued his shot just past the post.

The Jamaican made amends in the 28th minute, a stunning save denying Vladimir Volkov from close range, but he could do nothing to keep out the winger’s header as the Serbians regained the upper-had in a topsy-turvy tie.

Again it was Volkov who caused the problems, although questions will have been asked about the Rovers defence, as he was allowed to rise unchallenged at a corner and direct the ball beyond a static Thompson.

With nothing to lose, Rovers brought on Karl Sheppard at the break to lend support to Gary Twigg and the move started to pay dividends almost immediately.

Having looked comfortable for the first 45 minutes, the Partizan back four suddenly looked vulnerable. Chris Turner went desperately close soon after the restart, his header from a devilish Stevens cross glancing the foot of the post.

With Stevens and his fellow fullback Pat Sullivan taking up advanced positions, Rovers started to boss the play, much to the annoyance of the vocal home support who were stunned into silence before the hour mark.

Having forced the corner, the ball was only cleared as far as Sullivan who met it with the sweetest of volleys to leave Radisa Ilic with no chance from all of 30 yards. It was a goal worthy of any stage, but having gained parity Rovers seemed content to protect what they had.

Stefan Babovic, fortunate to be on the pitch after aiming an elbow at Stevens, was denied by a last-gasp O'Donnell block while the home side also wasted a four-on-two break as the match approached 90 minutes.

It was a pattern that continued as the match entered extra-time with Thompson all at sea as Babovic fired a long-range free-kick against the bar. The ‘keeper was extremely fortunate not to concede a penalty moments later when he clattered into Lazar Markovic in a challenge that could generously be described as reckless.

Rovers soldiered on, however, and started to hit Partizan on the break. Having earned a corner, Dan Murray should have sealed the tie from six yards but skied his effort over. The big centre half needn’t have worried as Rovers dealt the killer blow with their very next attack.

Again Rovers broke and with their defence conspicuous by its absence, Kilduff was allowed a clear run on goal. Ilic parried the shot, but when the ball broke to Sheppard the Partizan ‘keeper took him down before he could get his shot away.

All that remained was for O’Donnell to keep his nerve, which he duly did, as Rovers reached the promised land.