Bayern Munich also enjoy away win as they defeat Cologne 2-0, Monaco slip up in French league 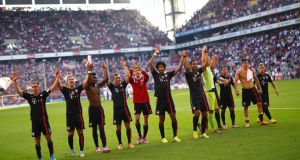 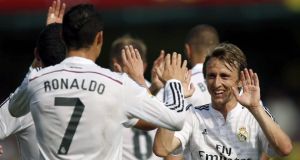 European round-up: Cristiano Ronaldo kept up his rich La Liga scoring form as Real Madrid beat Villarreal 2-0 to move up to fourth in the table.

Villarreal were able to match Real‘s slick passing for much of the game but their finishing let them down. Luka Modric gave the visitors the lead on the half hour with a drive into the corner from 20 yards.

Carlo Ancelotti gave his attacking players licence to exchange position and Karim Benzema, returning to the side, picked out Ronaldo to finish clinically in the centre of the penalty area five minutes from the break. It was his 10th league goal this season.

Villarreal continued to press forward after the restart with Mario Gaspar and Gabriel going close with efforts but following the high tempo of the first half both teams began to run out of steam.

Real now have 12 points from six games, a point behind Valencia, Barcelona and Sevilla who are in a three-way tie for first place.

Later Barca, who dropped their first points in midweek with a draw against Malaga, take on Granada while champions Atletico Madrid face Sevilla.

In Germany, Schalke 04 beat rivals Borussia Dortmund 2-1 in their Ruhr valley derby to confirm their improving form after a bad start to the season.

Joel Marip and Eric Maxim Choupo-Moting scored for Schalke, who host Maribor in the Champions League on Tuesday, before Pierre-Emerick Aubameyang pulled one back for the visitors.

Schalke moved up to seventh on eight points while last season’s runners-up Dortmund, who take on Anderlecht in the Champions League, slip to ninth, a point behind following their third loss in six league games.

With captain Mats Hummels making his first start of the season but without their entire first-choice midfield, Dortmund were on the backfoot from the start.

Hummels, who had not played since the World Cup final until the 2-2 draw against VfB Stuttgart in midweek, looked out of place when unmarked Matip rose among four Dortmund players to head in on 10 minutes.

Dortmund keeper Roman Weidenfeller then did well to block a Klaas-Jan Huntelaar effort but his defence let him down again with Cameroon international Choupo-Moting drilling in on the rebound in the 23rd minute.

Dortmund’s Aubameyang cut the deficit three minutes later but despite a strong second-half performance they failed to get an equaliser.

Bayern Munich extended their lead at the top with a patient 2-0 win over promoted Cologne, who were lucky not to concede more.

Mario Götze continued his scoring run with his fourth goal of the season and Daniel Halfar fired in an own goal in the 66th minute to lift the champions to 14 points, two ahead of Borussia Moenchengladbach, who eased past promoted Paderborn 2-1, scoring twice in the opening 14 minutes.

Ten-man Bayer Leverkusen, who had defender Emir Spahic dismissed in the 30th minute, rescued a draw at Freiburg, who also ended the game with 10 men. Leverkusen, who host Benfica in the Champions League next week, are third on 11 points.

Former champions Suttgart notched their first win of the season under new coach Armin Veh with a 1-0 over Hanover 96 with Daniel Schwaab’s goal enough to lift them away from the bottom.

Meanwhile, in France Monaco‘s recent resurgence was brought to a halt when they slumped to a 1-0 defeat in the Cote d’Azur derby against Nice.

Nice, who prevailed thanks to Carlos Eduardo’s early free kick, moved up to fifth with 13 points from eight games while Monaco are 12th on 10 points.

Following a woeful start to the season, Leonardo Jardim’s team had won two games in a row against En avant Guingamp and Montpellier to move out of the relegation zone.

But they lacked creativity as they once again suffered from the absence of James Rodriguez, who left during the close season to join Real Madrid.

Carlos Eduardo found the back of the net with an 18-metre free kick after keeper Danijel Subasic had failed to set up his wall properly.

Dimitar Berbatov repeatedly fell to the ground in the area but referee Ruddy Buquet denied him a penalty on three occasions.

Monaco forward Valere Germain suffered a rib injury and was replaced at halftime by Anthony Martial.

1 Leo Cullen: ‘It feels like it all came crashing down on top of us’
2 Champions League draw: Manchester United handed tough draw on return
3 McDunphy stuns Roche to take gold at National Road Race Championships
4 Lee Westwood fires flawless 62 to make the running in Scotland
5 Dave Hannigan: How Christy Ring aroused the curiosity of American media
Real news has value SUBSCRIBE
Crossword Get access to over 6,000 interactive crosswords