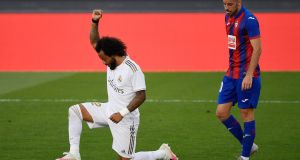 Toni Kroos got Real off to an ideal start at the empty stadium based at their training ground by scoring in the fourth minute while captain Sergio Ramos struck on the half-hour mark before Marcelo netted in the 37th.

Real did ease off after the interval and Eibar forward Sergi Enrich struck the woodwork before Pedro Bigas pulled a goal back for the visiting side on the hour mark.

Real coach Zinedine Zidane used all five of his substitutions as his players continued to tire. The win kept Real on La Liga leaders Barcelona’s heels with 59 points after 28 games. They are two points behind Barca after the Catalans beat Real Mallorca 4-0 on Saturday.

With Real’s Santiago Bernabeu stadium being revamped, Zidane’s men re-started the campaign at the 6,000-capacity Di Stefano stadium where their reserve side play.

Real are usually greeted by a throng of supporters when their bus arrives at the Bernabeu but they faced a far more relaxing journey on Sunday as they walked 300 metres from their residency at the training ground to the stadium.

Germany midfielder Kroos put his side at ease with a powerful first-time shot which fizzed into the far top corner while Ramos struck the second by knocking a pass from Eden Hazard into the net to complete a sweeping counter attack.

Brazilian left back Marcelo then further stretched the scoreline with a lethal finish into the bottom corner and celebrated by taking a knee in tribute to the Black Lives Matter campaign taking place around the world.

Meanwhile Diego Costa paid tribute to Atletico Madrid women’s star Virginia Torrecilla in Atletico’s 1-1 draw at Athletic Bilbao. The striker scored his first goal of the year and celebrated with Torrecilla’s shirt after the midfielder had successful surgery for a brain tumour in May.

The draw saw Atletico, who are sixth, miss the chance to move into La Liga’s top four after they came from behind on Sunday. Bilbao captain Iker Muniain opened the scoring eight minutes before the break when he steered in Yuri Berchiche’s cross with the outside of his foot.

Costa levelled two minutes later when he latched onto Koke’s through-ball and prodded in his first goal since October.

The Offload: Springbok heavyweights heading for Pro14 10:02
All in the Game: No sympathy from Bruno Fernandes 10:00
Ballymun claim Dublin title as Corofin beaten; Man City thrashed by Leicester 07:35
Ken Early: Handball ‘crisis’ a timely distraction from the grim bigger picture 06:00
GAA Championships await and we need a button for the buzz of the crowd 06:00

1 Ken Early: Handball ‘crisis’ a timely distraction from the grim bigger picture
2 GAA Championships await and we need a button for the buzz of the crowd
3 49 and out for Corofin as their long Galway reign is ended
4 Arctic conditions in Ballymena and snowflakes in Paris
5 Tour de France: Every yellow jersey winner must feel guilty by some association
Real news has value SUBSCRIBE
Crossword Get access to over 6,000 interactive crosswords