Rangers are back – with many troubles behind them, and many more ahead 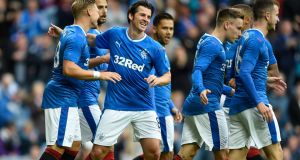 The SPFL’s television deal with Sky and BT is worth £20 million each season until 2020, to be shared by all 42 clubs – less than 100th of around £2.7 billion a year which the English Premier League’s 20 clubs will feast on from this season until 2019.

There are a hundred startling ways to illustrate that divide, but one going round in Scotland is that Burnley, the provincial yo-yo club that was the last stop in England of Joey Barton – Rangers’ star signing – will earn more from television this season alone than the 42 Scottish clubs domestically over the next four years.

Neil Doncaster, the SPFL chief executive, talks up the Scottish game’s health; the increased match attendances, generally more stable finances and greater supporter involvement in the ownership of clubs, such as Hearts, St Mirren and Motherwell. He also acknowledges the starkness of the divide with the English Premier League, and suggests “cross-border leagues” with other countries, offer the only possibility of bridging it.

Given the Old Firm’s historic dominance of the Scottish game, Doncaster is pleased, and relieved, Rangers have clambered back to the top flight, saying it has helped boost the number of countries screening SPFL matches to more than 100.

“The Old Firm game resonates around the world; it is the match for which Scottish football is principally known and we want and commercially need more people watching around the world,” he said.

Rangers’ gap with Celtic, who have won the top division and played in European competition every year Rangers have been absent, has grown substantial.

In 2014-15, the most recent year for which the clubs have published accounts, Celtic had income of £51 million – it was £65 million the previous year when they reached the Champions League group stage – and maintained a wage bill of £33 million. Rangers, failing to win promotion from the Championship that year, consumed in a titanic boardroom battle, made £16 million, and recorded a £7.5 million loss.

Supporters had also boycotted the merchandising operation with Sports Direct which the club argued was exploitative and from which it is still trying to extricate itself.

More than 42,000 supporters have bought season tickets for Rangers’ opening game in the Scottish Premiership and the signings of Barton and Niko Kranjcar have echoes of the star-stocked past. Rangers still carry the burdens of their crises and the accounts noted the club remains reliant on loans from the then new board of directors led by the chairman, Dave King.

The scandals are piled up in Rangers’ recent history like the lower divisions they hope they have left behind. They began following a challenge to the employee benefit trust tax-avoiding schemes by which, under the long-term ownership of the businessman Sir David Murray, rosters of players were paid, in addition to their salaries.

Deemed lawful in the Rangers “big tax case” by a tax tribunal and following an appeal, then unlawful after another appeal by Revenue & Customs, the status of the EBTs is due to be decided by the supreme court after BDO, the liquidator of the old Rangers company, appealed itself.

An SPL inquiry chaired by the senior Scottish judge Lord William Nimmo Smith concluded in 2013, when the EBT schemes had been ruled lawful, that the arrangements did not gain Rangers an improper sporting advantage during the years the players paid that way were winning league titles and competing in the Champions League.

The inquiry found Rangers broke rules only by not declaring to the SPL and Scottish Football Association the “side letters” by which the players were notified of their EBTs. The list of players paid via EBT between 2000 and 2010 tells of a lost age of Rangers’ European assumptions, including in its ranks Ronald de Boer, Andrei Kanchelskis, Mikel Arteta, Claudio Caniggia and Lorenzo Amoruso.

Murray sold the club on May 6th, 2011 to Craig Whyte; Rangers had won the SPL title in each of the previous three seasons, and the overdaft at the time stood at £18 million. Yet, within 10 months, Rangers were insolvent, and in administration.

Even now, an allegation persists the SFA was deficient in allowing Rangers a licence to compete in the Champions League during that season, 2011-12. The case, based on leaked documentation from the time and pressed by a group of Celtic supporters on their club to pursue as resolution 12 of the 2013 annual general meeting, was recently argued strongly in a report by the Tax Justice Network campaign.

The argument is that in breach of Uefa rules against clubs having overdue tax payable, Rangers owed £2.8 million on a discounted options scheme following a successful HMRC challenge known as the “wee tax case”.

The SFA is adamant its committee which considered the licence dealt with the issue thoroughly and received the necessary evidence the tax was not overdue according to Uefa rules. One informed source involved with the issue at the time, who did not want to speak publicly owing to continuing criminal proceedings against Whyte arising out of his tenure at Rangers, said that at the initial deadline, March 31st, 2011, HMRC had agreed that the £2.8 million did not need to be paid until after his May 2011 takeover.

Before subsequent June 30th and September 30th deadlines, Rangers, by then owned by Whyte, are understood to have told the SFA they were in discussions with HMRC over the money owed. Uefa rules allow tax not to be treated as “overdue” where there is a written agreement with the tax authority for payment to be extended.

The SFA, although declining to disclose details of the documentation it received, citing confidentiality with its member clubs, told the Guardian via a spokesperson: “The Scottish FA has always been clear the licensing award issued to Rangers in 2011 by the licensing committee was correct. The process is audited on an annual basis by Uefa.”

Uefa, pressed on the issue again recently, said: “The licence for the 2011-12 season was granted by the SFA and there was no reason for Uefa to doubt this decision.”

Uefa has said it has no need to investigate further if the tax was in fact overdue according to its definition, because after that season, Rangers’ fate anyway equated to a sanction for breach of the rules: they could not play in European competition for the following three years.

HMRC, taking a stern view of clubs defaulting on tax, declined to approve a company voluntary arrangement with creditors and Rangers went into liquidation.

The assets bought via a new company, Sevco Scotland Limited, Rangers were not accepted into the SPL, and the SFL insisted the club had to start from the bottom, in the third division.

Four tumultuous years later, Rangers are back; a coachload of troubles behind them, and many challenges looming on the road ahead.