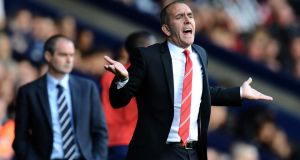 Paolo Di Canio has been sacked after only winning two of his 12 matches since being appointed manager in March. Photograph: Tony Marshall/Getty Images

The Texan is currently assessing his options — former Brighton boss Gus Poyet has emerged as the bookmakers’ favourite — after showing the 45-year-old Italian the door on Sunday evening with the dressing room in disarray.

However, while the club has been approached by a series of agents offering up candidates, Quinn is adamant the Black Cats need a man to establish a united front once again.

Quinn, who handed Roy Keane the chance to launch his managerial career at the Stadium of Light, admitted: “Sunderland need someone to galvanise the dressing room.

“They don’t need someone who is going to go out and say, ‘I’m in a hopeless situation here, these players are no good’. Sometimes managers try and buy themselves a bit of time by saying they have got a really tough job.

Sunderland will take their time as they attempt to get the right man, although the jostling for position is already under way.

Press Association Sport understands former England boss Steve McClaren is among those who would be open to an approach.

However, sources close to Roberto Di Matteo have indicated the Italian has some misgivings over the post, while Celtic’s Neil Lennon has already distanced himself from the speculation, as has current Watford manager Gianfranco Zola.

Zola told Sky Sports News: “Of course I am flattered that I am being considered for that, but I am really happy over here and I like what I am doing.

“My growth as a manager has been massive and so I want to fulfil this task that I have over here.”

As a result, Poyet has replaced Di Matteo as the bookies’ favourite with William Hill quoting him at evens with Di Matteo having slipped to 7/2, Tony Pulis at 7/1 and Zola and McClaren a further point out.

But Quinn has called for development coach Kevin Ball, who has been placed in temporary charge, to be considered.

He said: “I’d give Kevin Ball a look at it. Nobody can expect Sunderland to win their next two Premier League matches against Liverpool and Man United because they’re two of the best teams in the country.

“It would be wrong for people to turn around and say, ‘You’re on trial for the next two games’. The important things are the performance levels, the application and the dedication.”

Sunderland moved swiftly on Sunday to resolve the situation when it became apparent that the breakdown in the relationship between Di Canio and his players was irreparable.

The Italian had already been lined up when they decided to part company with predecessor Martin O’Neill in March, and they were able to make a swift appointment.

However, while it was clear that all was far from well within the camp, there were no imminent plans to unseat Di Canio until things came to a head in the aftermath of Saturday’s 3-0 Barclays Premier League defeat at West Brom.

That said, Short, a man who has made his millions by turning around failing companies, has never been one to dwell too long when there has been a big decision to be made during his time at the Stadium of Light.

Martyn McFadden, editor of Sunderland fanzine A Love Supreme, said: “If you look at some of the managers who have left under Short, he doesn’t let the grass grow under his feet. When he decides he is going to sack someone, he just does it.

“After the first meeting he had with Roy Keane, Keane resigned; the first time the fans turned against Bruce after we lost against Wigan, he was sacked the next day; Martin O’Neill was not given a full season in charge of the club despite having an excellent CV, and we were never in a relegation place under him.

“Maybe that’s just modern football. Maybe in 10 years’ time, a manager will be sacked for losing the first game of the season 4-0.”