Platini’s lunch with Sarkozy at the heart of corruption investigation

Michel Platini, the former head of Uefa, maintains his innocence after leaving a police station in Paris, France where he was questioned for hours over the awarding of the 2022 World Cup to Qatar. Video: Reuters 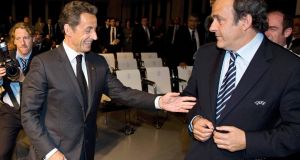 Then French president Nicolas Sarkozy with Uefa boss Michel Platini in Geneva on May 28th, 2010, after France was named host of the Euro 2016 football championships. Photograph: Laurent Gillieron/EPA

On November 23rd, 2010, French football icon Michel Platini arrived at the Elysée Palace for lunch with president Nicolas Sarkozy and found he was not the only one invited. Other guests included officials from Qatar – among them crown prince Sheikh Tamim Bin Hamad Al Thani.

Nine days later, the gas-rich Gulf state where temperatures exceed 40 degrees in the summer, was awarded the right to host the 2022 World Cup.

The sequence of events has placed the Élysée meeting at the heart of a global corruption investigation – and triggered the downfall of Platini, from football legend on the cusp of becoming the most powerful man in the sport to pariah left to grapple with legal problems.

On Tuesday, French police held Platini for questioning partly to shed light on the discussion that occurred in the French presidential palace.

As head of Europe’s football governing body Uefa at the time, he was involved in the decision to award the biggest sporting event after the Olympic Games to Doha. Investigators are seeking to verify whether Platini received bribes in exchange for his vote for Qatar, according to a person close to Platini, confirming reports by Mediapart and Le Monde.

They also detained Sophie Dion, then Sarkozy’s sports adviser, and questioned Claude Guéant, a close adviser to the French president. If investigators have strong suspicion of wrongdoing, they could place Platini under formal investigation, one step short of an indictment. Charges can still be dropped at a later stage. Platini, who was released in the early hours of Wednesday, Dion and Guéant have denied wrongdoing.

As a player, Platini was an elegant midfielder, captaining the French national team when it won the 1984 European Championships. He became the president of Uefa in 2007, a position from which he was also made a vice-president of Fifa, the international football body.

On December 2nd 2010, Platini and 21 other members of the Fifa executive committee met in the bowels of the organisation’s headquarters in Zurich to select a host for the 2022 World Cup.

Platini, who had been leaning towards a bid from the USA, cast his vote instead for Qatar – disregarding the blistering heat players would have to endure and the desert country’s lack of stadiums.

In an interview with the Financial Times five years later, Fifa president Sepp Blatter alleged that shortly after the Elysée lunch, Platini informed him he would break a “gentleman’s agreement” between Fifa’s top leaders to award the competition to the USA.

“Just one week before the election, I got a telephone call from Michel Platini and he said: ‘I am no longer in your picture because I have been told by the head of state that we should consider the situation of France’,” Blatter, himself ensnared in affair, told the FT.

Platini, however, denied having received any direct instructions from Sarkozy. “Sarkozy never asked me to vote for Qatar, but I knew what would be good,” he said in 2015.

On Tuesday, a spokesperson for Platini said: “He was not happy [about the lunch at the Elysée]Sarkozy. Platini (63), was the one who requested the meeting to inform the president of that decision, his spokesperson said.

While leading Uefa, Platini had planned an attempt to run for the Fifa’s presidency, vying for the most influential position in the sport. Those plans ran aground after he received a multiyear ban from football for ethics violations in 2015.

The ban related to a payment of 2 million Swiss Francs from Fifa to Platini in February 2011. He has maintained the payment was related to work for Fifa between 1998 and 2002, but there was no written contract and no record of the payment in Fifa’s accounts.

After Platini resigned as the head of European football, Gianni Infantino, once his subordinate at Uefa, rose to be elected Fifa president in 2015. Platini said recently that the pair were no longer on speaking terms.

Sarkozy has retained strong links to Qatar. As president of France, in June 2011, he played an active role in brokering the purchase by Qatar Sports Investments of Paris Saint-Germain from US private equity group Colony Capital, for a reported €70 million, according to people involved in the transaction.

The year after losing the French presidential election in 2012, Sarkozy received a €250 million pledge from Qatar’s sovereign wealth fund to start a private equity fund – a plan he dropped when he decided to return into politics. In 2012, he also gave a speech at the Aspire sports academy in Doha, an event organised by Richard Attias, the husband of Sarkozy’s ex-wife Cecilia . – Copyright The Financial Times Limited 2019