Over a century on Athletic Bilbao still stay strictly Basque 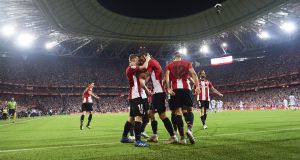 The sleepy town of Lezama sits 10km outside of Bilbao and is home to just 2,400 people, but it also accommodates one of the most unusual football clubs in the world: Athletic Bilbao. Just 14 years after being founded, Athletic were accused of fielding ineligible foreign players in the 1911 Copa del Rey, so decided they would only ever pick players who were born in the Basque Country or “formed locally”. More than a century later, that policy remains in place and they are still one of three clubs who have never been relegated from the top tier of Spanish football, alongside Barcelona and Real Madrid.

The club’s reliance on local talent starts at their training ground in Lezama, which was opened in 1971 and now hosts the first team, the women’s teams and their various academy sides. There are eight pitches, a gymnasium, a press room and medical room in Lezama, but it is the iconic arch – which was relocated here from the old San Mamés stadium – that gives the place the feeling of a great institution.

“This football club becomes part of our identity from the second we’re born,” says Jon Solaun, who played for the club and now coaches their Under-16 team. “Any boy born within a 60km radius of here is showered with Athletic balloons and gifts; maternity wards are plastered in red and white. I was born in Bilbao and to put on this tracksuit and represent this club is everything to me. I know the boys feel the same pride. We all feel like a piece of history here as a family.”

“It’s incredible for the kids to be around one another and watch each other grow through the categories as both people and players. When a Lezama kid pulls on the red and white in San Mamés, we all feel a great sense of triumph.”

For the past five years running at least two academy players have graduated to the first team, which is a source of great pride for sporting director José Amorrortu. “Eighty-five percent of first-team players came through this academy and the average stay here before reaching the first team is seven years,” he says. “We take them as young boys and mould them. These figures are just a consequence of our work.”

Amorrortu played for Athletic – even representing them against Juventus in the 1977 Uefa Cup final – before managing both the youth team and the first team, so he understands the culture as well as anyone. “We have 20 scouts around the Biscay area and we also have 150 brother clubs in the region that monitor the progress of youngsters and send them to Lezama if they feel they possess the qualities to play here. We trust our coaches and local clubs to develop the kids so much that we don’t even start our academy programme until they are Under-10s. Just last year we had 1,500 nine-year-olds train here. It’s not difficult to find players.”

Amorrortu says his coaches want to see players with “cognitive skills”. “We want to know how they think and make decisions on the pitch, and then see how they act off it.” The 65-year-old uses the word “values” a lot. “Kids will have roles and responsibilities as soon as they enter the building; whether it’s sorting the kit, cleaning the dressing-room or carrying equipment. There’s a rota.

“I’ve worked at Atlético Madrid and other elite clubs, but nobody has what we have. We have a culture here, an identity. It’s our job to create good people as well as good players, and nobody does that like we do. Family is everything for Basque people and we want to do right by our own people. There’s no greater sense of pride for a boy than playing football for this club.”

The former Spain international scurries to his office and returns with a sheet of paper. “It’s important they have more means to life than football. Careers are short and they’re one bad tackle away from it all being over,” he says as he hands me a team-sheet. “Our third team is made up of 21 kids between the ages of 18 and 19; 13 of the 21 are currently doing degrees at university. Yet, we don’t force anything on them, we just encourage good values. Especially in today’s game and society, our boys are an example.”

The first team have completed their work and gone home, so now the youngsters have their chance to train below the picturesque Basque hills. The standard is exceptional. “Very technical,” says Amorrortu. “We drive technique, technique, technique.”

The youngsters move the ball back and forth with various touches and turns, as the coach constantly reminds them of “Three key points: 1. Posture: keep your back upright while bending your knees. 2. Vision: check your surroundings for space and people. 3. Change of rhythm and direction.”

Following 30 minutes of technical work, the importance of strategy and shape is drilled home to each individual. There’s an earnestness around the place and standards are extremely high, so much so that two lackadaisical Under-14s are sent out of the session, ordered to stand at the side and watch with their hands behind their backs.

“Every single individual here has to be a representation of the club and the people,” says Under-18s head coach Iban Fuentes. “As soon as a kid takes it easy, he needs to be reminded that there are others desperate to be in his place. This is the nature of the game and we must provide them with a sporting education as well.

“Society is changing and the model professional isn’t what it was 20 years ago. We work hard to keep the boys focused, but there are difficult moments. However, they tend to reach an age where they understand that money can’t buy what we have here at Athletic. That’s where the hard work from everyone pays off. This club is like no other. We train alongside the first team and the boss ensures there are no barriers between us and them. They will stop and chat to the kids when passing by and they always follow the development and growth of their own.

“We’re all living the dream. Every person in this complex has a season ticket. If the first-team play away, the kids will train then go home and put on their Athletic pyjamas to watch the game with their family. The coaches have a meeting point in town where we watch the games together. We’re all members of the Athletic family and have our own culture and identity.” – Guardian service