The Barcelona bound Brazilian playmaker shines in victory over Mexico 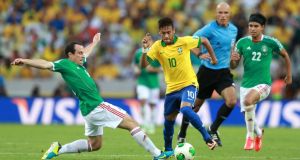 Neymar, inspired by the protest movement which has swept Brazil in the last few days, gave possibly his best performance for his country in a 2-0 win over Mexico in the Confederations Cup.

The Barcelona-bound 21-year-old, who has often struggled at international level despite his billing as the next great Brazilian player, set the hosts on their way with a stunning volley in the ninth minute, the second game in a row that he has got them off to a flying start.

He repeatedly tormented the Mexican defence and brought the crowd to life with his often cheeky trickery before producing the high point of his display deep into stoppage time.

Collecting the ball on the left, he teased the two defenders blocking his way to the penalty area, then somehow slipped between them and laid the ball off for substitute Jo, only called up as a replacement for the injured Leandro Damiao, to score for the second match running.

Neymar’s performance lit up an otherwise ordinary display by Brazil, who produced an electrifying opening 20 minutes but only performed in fits and starts after that.

“We faced a lot of difficulties at certain moments of the game,” Brazil coach Luiz Felipe Scolari, whose side have won both their Group A matches without conceding a goal, told touchline television reporters.

“We lost ourselves for 15 minutes, we lost concentration at certain points and that’s something we have to correct. But I want to emphasis this Brazilian spirit which we experienced in Fortaleza.”

The game was played against the backdrop of protests which have rocked Brazil in the last few days.

There were demonstrations outside the stadium before kick off with protestors demanding “health, education, not corruption”.

The nationwide protests were sparked last week by transportation fare increases, which came as Brazil struggles with annual inflation of 6.5 percent, unleashing a tide of complaints that caught authorities off guard.

Before the match, Neymar surprisingly spoke up in favour of the protestors, an unusual move for footballers who usually steer clear of politics and try to say as little as possible.

“I’m Brazilian and I love my country. I have a family and friends who live in Brazil. For that reason, I want a Brazil which is more just, safer, healthier and more honest,” he said.

“The only way I can represent and defend Brazil is on the pitch, playing football. From now on, I will enter the field inspired by this movement.”

Playing at the stadium where they suffered their last home defeat, against Paraguay in 2002, Brazil went straight for the jugular as they created several chances before Neymar put them ahead.

Mexico defender Francisco Rodriguez failed to properly clear a header and the ball landed at an awkward height for Neymar, who showed great technique to volley the ball left-footed past Jose Jesus Corona in the ninth minute.

Brazil continued to pour forward and Neymar was close to a second when he rifled another left-foot shot just over the crossbar from the edge of the area.

He continued to be a threat even after Brazil let Mexico back into the game.

In the second half, he shot across the face of goal and then pulled another trick out of the bag with a delightful flicked pass to set up Hulk, who fired wide from six metres.

Paulinho then galloped 50 metres before laying the ball off to Neymar, whose shot was saved by Corona.

1 Gerry Thornley: After 32 weeks the Six Nations is back up for grabs
2 Johnny Sexton aware of how Ireland can offer fans an escape
3 Extremes of sweet and sour for Solskjaer as Man United show signs of revival
4 Arsène Wenger: Arsenal was a matter of life and death to me
5 Stockdale and Ringrose on board with expansive Irish game plan
Real news has value SUBSCRIBE
Crossword Get access to over 6,000 interactive crosswords