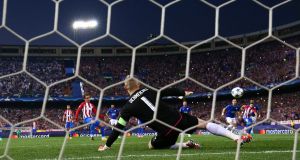 For Leicester City, it was a long, gruelling night but they did at least emerge with a glimmer of hope and maybe even a sense of relief that the worst might be over. England’s last representatives in this competition could not manage a single shot throughout the entire evening but that should not bother them unduly when Atlético Madrid, for all their superiority, were restricted to only one goal.

It sets up a thrilling return leg next Tuesday when Leicester, losing here to a 28th-minute penalty from Antoine Griezmann, will need to summon all the competitive courage that helped them overcome Sevilla after a 2-1 first-leg deficit in the last round. The difference this time is that they do not have an away goal and, defensively, they will also have to make do without Robert Huth because of a second-half booking that means he will be suspended. Leicester already have doubts about Wes Morgan’s participation and these factors, combined with Atlético’s expertise at knock-out football, mean the Premier League champions will be considered unlikely winners. That, of course, is the way they usually like it.

All that can be said for certain is that it will need a heroic performance from Craig Shakespeare’s team and they will surely have to operate with more adventure on their own ground.

A lot of Leicester’s success has been built on their ability to withstand concerted pressure then try to catch their opponents on the break. Even so, there have not been many occasions during their rise when they have been pinned back for this long. Atlético’s early dominance could be summed up by the statistic, 10 minutes in, telling us Diego Simeone’s men had 80 per cent of the possession. Koke’s 25-yard firecracker had skimmed off the post and, by half-time, Atlético had managed another 10 efforts at Kasper Schmeichel’s goal.

Yet it was a contentious way to go behind and Leicester’s players left the pitch at the end with a smouldering sense of injustice because of their conviction that Griezmann had been marginally outside the area when Marc Albrighton raced into the challenge that left the Swedish referee, Jonas Eriksson, pointing to the penalty spot. Griezmann’s momentum meant he landed well inside the perimeter line, which was perhaps his strategy, but the replays confirmed Leicester had a legitimate case to be aggrieved and, at this level, they needed the luck to go their way rather than against them.

At the same time, Leicester’s analysis should not just be restricted to the referee’s judgment. Perhaps, after all that early pressure, the players in blue temporarily forgot that Atlético are fond of operating on the counterattack, too.

Danny Simpson, in particular, was caught out as Leicester’s first flurry of attacking possession gave the home side the chance to break from inside their own penalty area. Griezmann’s run started from inside his own half, as he collected the ball on the left touchline, and Simpson was suddenly in a race to get back in position. Albrighton was trying to bail out his team-mate and maybe he was too eager with his challenge when it would have been better to stand off Griezmann and try to hold him up. He ended up barging into the player’s back and in these moments there were glimpses of Leicester’s inexperience.

Atlético, in comparison, must rank as one of Europe’s more streetwise teams, though not always in the most appealing fashion judging by Simeone’s apparent quest to ensure Jamie Vardy received the booking that would have meant him missing the return leg, flourishing an imaginary card on at least two occasions.

Otherwise, Atlético’s performance was a reminder of why they have reached two of the last three finals. As well as outpassing and out-thinking Leicester for long spells, the statistics also showed they out-ran them by some considerable distance. It was quick, high-energy, almost unremitting pressure, with Griezmann, Saúl and Yannick Carrasco adding some refined touches, and there were extended periods when Leicester simply found it beyond them to apply any sustained pressure of their own. Riyad Mahrez was only on the edges of the game. Vardy was an isolated figure and there were only fleeting moments when Leicester seriously threatened Jan Oblak’s goal.

All the same, they might also reflect on the moment just before the hour when Mahrez did find a way into the opposition penalty area and went to ground as Gabi came across to challenge him. There was no doubt Mahrez did exaggerate his fall and seemed more intent on winning a penalty than actually creating a shooting opportunity. Yet it would not have been a scandal if the game had been given its second penalty. Gabi had flicked out his right leg but was quick to bring it back and make his case, vociferously, that it was an attempted deception on the part of his opponent.

That decision could have been extremely chastening for Leicester if Fernando Torres, with one of the night’s better opportunities, had not slipped just as he was shaping to take aim from the edge of the penalty area. This, however, was the regret for Atlético at the end of the night.

They might have been on top but they were struggling to turn their superiority into the hard currency of goals.

It meant they finished the night with their own frustrations. Shakespeare substituted Vardy in the 78th minute to make sure he did not suffer the same fate as Huth and Leicester can ultimately reflect on a reasonably satisfying night’s work.