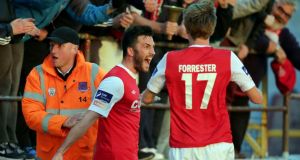 Killian Brennan went from zero to hero for St Pat’s as having missed a penalty in the first-half the midfielder scored the opening goal of the game at United Park as Pats recorded a 2-0 win over Drogheda United on Friday night.

Pats started much the brighter and their early endeavour was almost rewarded on 11 minutes when Killian Brennan was denied by the crossbar with a well struck free kick.

As the half wore on Drogheda came more into the game and they too spurned chances, Adam Whelan was denied by a last gasp Jason McGuinness tackle while a minute later Sean Thornton fed Tiarnan Mulvenna and with time and space the striker just pulled his shot wide of the far post.

On 32 minutes Pats were awarded a controversial penalty when Adam Whelan and Killian Brennan came together in the box and the Pats midfielder went down very easily. From the spot kick however Micheal Schlingermann made a diving save and Chris Forrester curled the rebound away from goal leaving many to feel justice had been done.

A lively start to the second-half saw Jason Marks and Mulvenna denied in the box by two blocks but Ger O’Brien almost scored what would have been a serious contender for goal of the month, if not season. From 30 yards out he hit a screamer which swerved and dipped and hit the underside of the crossbar before bouncing out.

With the clock ticking down Pats were pressing the game a lot more and having just come on, Robert Bayly was dispossessed and from there they forced a corner which Conan Byrne delivered and Brennan rose highest to head the ball past Schlingermann.

The three points were secured deep into stoppage time when Morgan Langley supplied the pass to Jamie McGrath who had an open goal and duly obliged.