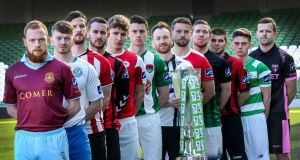 The early season form of Keith Long’s side was one of the great surprises of last year and though they ran out of steam somewhat as the months wore on, they were the only side to beat Dundalk in the league and finished the season in a highly creditable 5th place with a sense of a restored spirit about the club. Most of the team has been retained including key performers like Roberto Lopes and Ismahil Akinade. Kurtis Byrne looks the best of the signings although he would be eclipsed if Mark Quigley actually manages to rediscover his form of a few seasons back.

After a traumatic year that ended with the team avoiding relegation in a surprisingly comfortable manner really, Mick Cooke has been given resources in the hope that he might he discover the touch he displayed at Drogheda United. Conor Kenna, Alan Byrne and Ryan Brennan come into a side that already includes experienced goalkeeper Peter Cherrie and with the link to St Joseph’s Boys restored there is the prospect of more good young players to come. There should be onfield progress then but it will be almost as interesting to see how things at boardroom level develop.

John Caulfield might argue that he is a victim of his own early success in the City job but the reality is that there will be greater pressure this year to topple Dundalk. Things have certainly been significantly reshaped and there appears to be a better balance between youth and experience as well as, one suspects, the ambition to play a brighter style of football. Greg Bolger looks to be the key recruit but Gearoid Morrissey’s return and Sean Maguire’s arrival all look to have improved a team that always really looked second best last time around.

Against the background of the Brandywell’s redevelopment, new manager Kenny Shiels faces a difficult task to significantly improve the on-field fortunes of a club that has been one of the league’s best at bringing on talented young players but has consistently struggled to keep them. There are some bright prospects again to look out for again and Keith ward looks a decent recruit but the team’s immediate fortunes may depend first and foremost on the ability to Rory Patterson to stay fit and score goals because they didn’t get nearly enough last season.

The champions had such a decisive edge on everybody else last year that the title seems almost theirs to blow this year but then their closest rivals look to have improved, the departure of Richie Towell takes a lot of goals out of the side and winning in the way they do is a hard thing to sustain over a prolonged period of time. Stephen Kenny has recruited Pat McEleney and Robbie Benson, both of whom should prove to be good signings and if Stephen O’Donnell avoids injury he will be like a terrific one. Still, making it three in a row would be aa tremendous achievement.

Harps did very well to nick promotion ahead of UCD but Ollie Horgan has been dampening expectations at every turn over the last few weeks and his side will do very well to avoid going straight back down this season. Richard Brush, Ryan Curran and Sean Houston will bring much needed top flight experience and it will be interesting to see how Ryan McConnell adapts to life back in Ballybofey after his time at Manchester United. The side as a whole, though, will surely have to thrive there if they are to have any chance of battling their way to safety.

After the turmoil of the last few years, United had plenty of cause for satisfaction for last season even if they only avoided the play-off spot by two points in the end. Tommy Dunne has assembled a talented young group and he had an awful lot to cope with last year on the injury front. Jake Keegan’s departure robs the team of one of its leading goalscorers by the hope will be that Vinny Faherty will maintain the sort of form he showed at Limerick. The number of goals conceded is at least as big a concern Armin Aganovic’s ability to settle in after arriving from Sweden may prove key.

Their top six finish was a remarkable achievement for Longford last season but this year may prove every bit as challenging as experienced players like Stephen Rice, Pat Sullivan and skipper Mark Salmon depart. The loss of Gary Shaw to Shamrock Rovers will, it is hoped, be offset by the return of Josh O’Hanlon on loan from Bournemouth. Former underage international Kealan Dillon looks to be the pick of the other close season signings and, overall, they will probably do very well to repeat last year’s success and they will surely need to tighten up defensively if they to manage it.

This will be an interesting year for Rovers and their manager Pat Fenlon who is bound to find himself under more pressure to have the team seriously challenging for if not actually winning the title. On the face of it, they were only two points adrift of Cork in second last season although their run of six unbeaten at the end as City lost their way a bit, skews things slightly. Still, Brandon Miele and Mikey Drennan are amongst the young players who showed a lot of promise while Killian Brennan returns and a consistently fit Danny North could be a huge boost.

New manager Dave Robertson has introduced a fair bit of fresh blood to a squad that retains very few of the players that won the league just three years ago and Alan Keane, Richard Brush, Dinny Corcoran and David Cawley have all gone since the end of last season. Amongst the new arrivals with league experience and Mick Leahy from UCD and Michael Schlingermann from Drogheda United. Robertson clearly rates some of the players he has brought from England, several of whom he has worked closely with before but, not for the first time at the Showgrounds, there quite a few unknowns.

After a disappointing 2015 campaign, things have been shaken up a bit at Richmond Park where the loss of central midfielders Greg Bolger, James Chambers and Killian Brennan ensures that there will be a different feel to the side. Dinny Corcoran should relieve some of the pressure on Christy Fagan while Keith Treacy, David Cawley, Mark Timlin, Graham Kelly and Billy Dennehy all provide new options across the midfield although at least as important will be Liam Buckley’s ability to field a more settled back five given the problem he had to endure in that department last time around .

Shane Keegan did a remarkable job to guide Wexford to the first division title last year and has done well to retain the team’s best players, most obviously runaway top scorer Danny Furlong. On the face, of it, though, he’ll be doing very well to avoid this season being a long scrap to avoid going straight back down. The club’s ethos is hugely admirable but the squad’s relative lack of experience of this level and their tendency, even in the first division, to concede quite a few goals, leaves them looking vulnerable. Danny Ledwith is the best known of the new recruits.