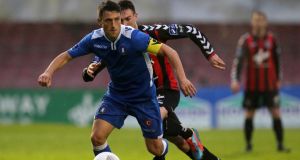 Limerick’s current captain Shane Duggan’s father was the last man to score for the club at Markets Field 31 years ago. The Garyowen venue is again the club’s home ground. Photograph: Ryan Byrne/Inpho.

Drogheda United are the visitors as Duggan and his team-mates will strive to add a first win of the season to make the homecoming all the better.

“I think it’s a must-win,” said Duggan as Limerick sit six points adrift at the foot of the Premier Division table. “There are still a lot of points to be played for, but we need to start picking up wins now. We can’t let the teams above us pull away any further. We don’t want the gap getting too big, where it gets too hard to claw back. It’s a very winnable game.

On a personal level, Duggan would also relish getting on the score sheet.

“My father (Ger) always spoke about the games they had there and the success they had throughout the years,” said Duggan of the Garryowen venue. “They had great crowds and great support. My father was the last player to score a league goal for Limerick there before they moved on, so it would be nice to get a goal.”

Full-backs Sean Harding and Colm Murphy are out injured for Martin Russell’s side while they wait on the availability of Paudie O’Connor who is sitting his Leaving Cert.

Elsewhere, champions Dundalk, six points clear at the top of the table, have Brian Gartland, Darren Meehan and captain Stephen O’Donnell back fit to give manager Stephen Kenny a full squad ahead of Bohemians’ visit to Oriel Park.

If only Keith Long, Bohemians’ boss, was so fortunate as Marc Griffin has joined Derek Pender, Anto Murphy and Paddy Kavanagh on their injured list and Dean Kelly is a doubt.