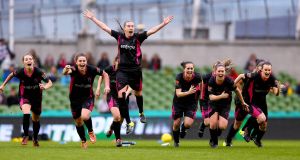 On a day when the swirling wind threatened to blow everyone away, four teams steadfastly stood their ground at the Aviva stadium, where, in front of a crowd of 25,103, both FAI Cup finals went the distance before Dundalk and Wexford Youths got to lift the silverware.

As he has been so many times this season for Stephen Kenny’s side, Richie Towell emerged as Dundalk’s hero, the 24-year-old poking home from eight yards after 107 minutes to score the only goal of the men’s match after good work by Daryl Horgan down the left.

“I said to Horgs coming out for extra time, ‘Horgs, just give me one chance,’ ” said a beaming Towell not long after the final whistle.

“He was getting into great spaces and I just wanted one opportunity because I was confident I was going to put it away. The little man put it on me foot as usual, and I was lucky enough to hit the back of the net.

It was Towell’s 29th goal of an outstanding season, and if he leaves Dundalk now, as many expect he will, Kenny’s greatest challenge for next season will be to somehow fill the gap he leaves behind. Here, however, high perhaps on another remarkable success, the midfielder suggested he might well stick around.

“I don’t know what’s going to happen,” he said. “It’s a very frustrating time for any League of Ireland player, I think, but it’s something I’m probably going to have to get used to if I’m going to stay here.

Kenny acknowledged matching this year’s success will be quite a challenge, whether Towell stays or goes, but he preferred for the moment to savour another career milestone.

Three years ago, Dundalk were scrapping for top-flight survival and in the short time since the Dubliner has transformed them into the country’s best side – and by a distance.

“It’s a tremendous feeling for everyone at the club,” he said when he emerged from his side’s dressing room. “It’s been an epic season really, and to win everything the way we did in the end, to win the cup like that, it was a great effort by the players.

“It was a difficult match. Cork have great competitors all over the park; they’re very competitive, ultracompetitive, and they don’t give you an inch. We found the first half difficult, after the first 20 minutes when we had control of the game; it was frenetic then, it was difficult to get a foothold on it but we managed to do that in extra time, I felt.

“We had the best chances on the day but while it’s nil-all you always know you can concede right at the death and it’s over, you’re out, you’re going home, so it was important that we defended well and we did that then we took our chance when it came.

A few feet away, John Caulfield readily admitted as much.

“To be fair,” he said, “on a day like this you have to congratulate Dundalk. They’ve won the league twice, and they’ve won the double. From our point of view, our players left everything on the pitch. That’s all I asked for and if that wasn’t good enough, and obviously today it wasn’t, then fair enough.

“In extra time I thought they totally dominated us,” he said. “I thought for long periods of the match we were well in there but certainly in extra time we were in trouble and on the back foot. And we have no excuses from that point of view.”

The women’s final, meanwhile, could scarcely have been more dramatic, with a last-gasp equaliser by Ciara Rossiter for Wexford Youths forcing extra time.

A goal by Dearbhaile Beirne scored with the last kick of the additional 30 minutes led to things having to be decided by penalties.

Substitute Tamara Furlong then saved Shelbourne’s first and Wexford never looked back, converting every time to complete a league and cup double of their own.