Rebuilding coming to fruition as Dundalk stay in the hunt 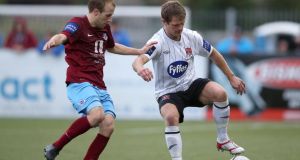 A year ago, recalls Gavin McLaughlin, a game in Belfield Bowl played in front of 121 people provided a pretty stark sense of where Dundalk stood with even its core fans. Times are changed, though, and tonight Stephen Kenny’s team head to Inchicore having sold 1,200 tickets and turned many more away.

“Outside of cup finals,” says McLaughlin, a long-time follower of the club for the Democrat newspaper, “I really can’t recall the like of it.”

St Patrick’s Athletic have Greg Bolger suspended, Stephen Maher injured and doubts about Killian Brennan and Shane McFaul while Dundalk have Darren Meenan and Chris Shields suspended but Stephen O’Donnell and Dane Massey are back. For the visitors, though, the fact that they are playing in a game being billed as a title decider barely a year after the club’s very existence was under threat is the real news.

‘No side issues’
“There have been no side issues or big distractions . . . no politics, planning fees or any of that,” says Colm Murphy, the club secretary, in relation to calm that has followed last year’s takeover by local businessmen, with strong links to schoolboy football, who enjoyed the backing of a supporters’ trust. They replaced Gerry Matthews, a builder who had saved the club then struggled to keep it alive as his own finances slumped in the recession.

Work needed to be done on many fronts but, having narrowly avoided the drop last year, the team was clearly a major problem and so Kenny, available in the wake of his brief stint at Shamrock Rovers was recruited for a spot of rebuilding.

“The expectation was to maybe finish mid-table and kick on from there,” says goalkeeper Peter Cherrie, the club’s longest serving player,” but Stephen’s come in, put the passion back into the players and we’ve taken the league by storm.”

They’ve won nothing, everybody is at pains to point out of course, but with six matches to go, Dundalk are firmly in the hunt for the title with a cup semi-final to come in a couple of weeks while the brand of football they are playing has re-energised what had been a largely dormant support. “To compare it with last season is like comparing night and day,” says Cherrie.

Scale of transformation
The scale of the transformation Kenny was undertaking sort of crept up on people, says McLaughlin, but those who were paying attention began to take note. “Even then, though, nobody was expecting what’s happened,” he says.

When Pat Hoban was recruited from Mervue some were sceptical, he recalls, while Richie Towell, was said to be much sought after but, some asked: if he was so good, why was he playing for Bluebell. He was, Kenny knew, simply between bigger things.
If they were slow to see the team’s potential, though, the people of the town have been catching on ever since. “The players are heroes here in a way that I haven’t seen since the late eighties,” says McLaughlin of the view in a town that, says Kenny, “is a place with a huge passion for football and a real tradition in too, which is important.”

And, Murphy says, a little bit of the stardust sprinkles down on the long term fans too. “Often you just get a lot of stick for being involved with a League of Ireland club but now they see where you’ve been coming from all this time.”

Required surgery
As they head for Belfield in the hope of making up some ground on the leaders, Sligo Rovers are without Raffaele Cretaro through suspension while Evan McMillan and Ross Gaynor are unlikely to be involved despite having returned to training after spells on the sidelines.

Their hosts are without Tomás Boyle who required surgery after taking a bad knock to the face in the Bray game.

Derry are unbeaten in 13 against Bray and could do with maintaining that run after losing six of their last eight in the league.

They have a string of injury and suspension problems again, though, as they welcome Wanderers to the Brandywell this evening.

Barry McNamee, Ryan McBride and Kevin Deery are amongst those confirmed to be out while Sean Houston (ankle), Patrick McEleney (foot) and Dean Jarvis (knee) are all struggling to be fit.

Danny O’Connor (knee) is Bray’s only real doubt while Eoin Hyland is back after a hamstring problem.

Ahead of the night’s relegation-related Dublin derby, Shelbourne, who already have a significant list of long-term injuries, will be without Robert Bayly again, but Lee Murphy and Jamie McGlynn return after being cup-tied.

Bohemians, who will have Bobby Browne in the dugout, have a full squad to choose from.