Patterson spot on as Derry move closer to the top 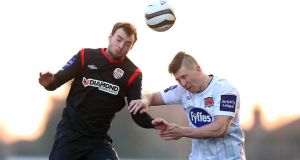 Dundalk 1 Derry City 3: It may not be quite up to the standard being set by Sligo who play today but Derry’s best start to a campaign in almost a decade continued last night at Oriel Park where Declan Devine’s side came from behind and then survived the handicap of a late sending off to beat a lively looking Dundalk side. At least for a little while, the victory moves City to within two points of the league leaders who play this afternoon.

Rory Patterson was central to the win – despite not looking fully fit – with the striker scoring two spot kicks and laying on Derry’s other goal for Barry McNamee. Somewhat inevitably, however, the hosts will argue that referee Neil Doyle was at least as influential.

Stephen Kenny’s side actually got a few breaks themselves from the official over the course of the night with Derry having a decent case, for instance, for a third penalty late on.

The visitors
Critically, though, the controversial decision to award the first handed the visitors a handy route back into a game in which, up until then, they had been comfortably second best.

City had arrived as the league’s top scorers but prior to that penalty, just over half an hour in, it was hard to see where they’d rustle up a goal from. Though Devine’s side enjoyed their share of possession, they were generally outpassed by their hosts who made better use of the ball as they pushed forward and who might well have been in front even before Vinny Faherty got the game’s opener 19 minutes in.

The Galwayman’s striker rounded off a really wonderful passing move that had started deep inside Dundalk’s half and involved John Dillon, Dane Massey and Stephen O’Donnell before Keith Ward played a brilliant low angled pass for Faherty that just eluded Shane McEleney and left the striker with enough time to tee his shot up from what was a tight enough angle.

Kurtis Byrne had fired wide when presented with a remarkably similar chance not long before and prior to that the striker had strayed fractionally offside when Faherty looked to have sent him clear through on goal.

Dundalk, indeed, were opening up the City defence almost every time they got into the final third for a while and further opportunities seemed certain to follow their opener.

To grips
Steadily, though, the visitors started to get to grips with things and by imposing themselves a little more physically on the game in midfield they began to turn the tide.

Their penalty looked a soft enough affair. Barry McNamee’s angled free from the right found Michael Rafter with his back to goal and a yard inside the area where he hit the ground after what seemed a rather run-of-the-mill aerial challenge from behind by Mark Rossiter.

Patterson, in any case, stepped up and coolly slotted it low to Peter Cherrie’s left.

It was his sixth of the season, and he made it seven 23 minutes into the second period with a precise replica after John Sullivan blocked Barry Molloy’s shot and Doyle waved away the claim that he had only been protecting himself

After the first, the locals picked themselves up and sought to start again but they never really regained the upper hand. Richie Towell was again impressive playing just in front of the centre backs but in front of him things were a little hit and miss. Dillon, for instance, produced a handful of terrific passes but also misplaced some at key moments.

Between the penalties, McNamee gave the visitors the lead with a well-struck shot after Peter Cherrie had punched away a corner.

At 3-1 they looked to have the points wrapped up but Shane McEleney’s dismissal for a challenge on Tiernan Mulvenna after the substitute had been put through 16 minutes from time, provided the home support with hope of a late revival.

1 Dave Hannigan: Notre Dame’s Fighting Irish leprechaun needs its ass kicked
2 Trick or treat: Ireland set for Halloween showdown with France in Paris
3 Leeds go back to the summit after impressive win over Stoke
4 Katie Taylor out to banish all doubts in rematch with Delfine Persoon
5 Justin Rohrwasser: The Patriots’ surprise draft pick with a Three Percenters tattoo
Real news has value SUBSCRIBE