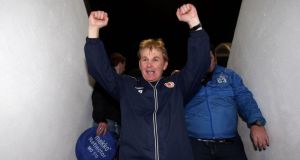 Liam Buckley did a quick double take last night when asked at his post-match press conference whether his teams had the goals in it that would be required to win the league title. Then he, the reporters and the large audience of supporters allowed themselves a good laugh.

The many sceptics had doubted it before the campaign kicked off, with the Inchicore outfit lacking the sort of proven striker they believed would be required to propel the club to the title.

In the end, though, they were wrong. As the celebrations warmed up on Emmet Road last night the new Airtricity champions could point to just about every aspect of the league table with pride, for Buckley’s men won more games and scored more goals than any of their rivals. Conan Byrne might only just scrape into the Premier Division’s list of top-10 scorers with nine, but no fewer than four of the players lying just behind him on eight are team-mates.

Last season
Having finished third last season, then lost what appeared to be key players to rivals, just about every aspect of the St Patrick’s challenge was better this season.

They scored seven more but also tightened up at the back by the same number and in central midfield, where it seemed James Chambers would surely be missed, they excelled, with Greg Bolger rivalling, at the very least, the team’s outstanding performers, like ever-present full-backs Ger O’Brien and Ian Bermingham for the club’s title of best player.

The early defeat in Tallaght was a reminder that after fourth- and third-place finishes, ascending the summit would not be easy, but as things gelled, they gradually came to assert themselves as the best side in the country.

Along the way they avenged that Rovers defeat in some style and have finished the season in a remarkable run of form.

The manner of the finish was still special. The Dubliners took seven points from nine against champions Sligo and on the big occasion here at the end of last month beat their only other serious title rivals Dundalk, also by two goals to nil.

And for Buckley it must all be particularly sweet given the remarkable journey he has travelled over the 14 years since he guided the club to its last title. The challenge this time is to push on far more effectively and Buckley sounds as though he has a plan.

“ We’re not the finished article and it’s no secret that you need to be better with the ball when you’re playing in Europe, but if we can continue to improve then that’s important,” he said.

“I’m delighted for Liam, the players, the supporters, the volunteers and the whole community,” said owner Garrett Kelleher, the man who took over in 2007 and has witnessed quite a few near misses on the trophy front since.

“It’s a family club and I’m just the caretaker.”

1 Ireland to stick with winning formula against England
2 Gerry Thornley: England primed to show their best against Ireland
3 Should fans be allowed drink in the stand at sporting events?
4 Lewis Ludlam eager to make his presence felt for England
5 Newman expected to survive fiery crash at finish of Daytona 500
Real news has value SUBSCRIBE