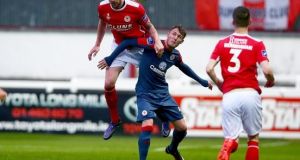 Kieran Sadlier scored twice as Sligo Rovers recorded their biggest win of the season to move back up into the top half of the Premier Division table.

Negligent defending was punished as Sligo enjoyed the perfect start with the opener after just two minutes.

Raffaele Cretaro cleverly made a run in behind onto Sadlier’s through ball to calmly drill low past Graham Doyle at his near post.

Youths recovered to shade possession for the remainder of the half and were inches from equalising on 31 minutes.

Paul Murphy swept the ball out to the right for Conor O’Keeffe whose cross was crashed against the bar by Chris Kenny’s header.

But further bad defending by the home side gifted Sligo a second goal five minutes into the season half.

Defender Stephen Last gave the ball away and winger Daniel Kearns was alert to nip in and score at the second attempt after Doyle parried his initial shot.

Sligo then sealed their win with two goals inside three minutes.

New singing Achille Campion came off the bench to rifle Cretaro’s cross home off a post with virtually his first touch on 67 minutes.

The impressive Sadlier then scored direct from a free kick before adding the gloss with Rovers’ fifth goal on 82 minutes.

Cretaro did the spade work on the left to find Sadlier who neatly turned two defenders before shooting to the net at the near post.